FRA:LK1) announces that the timeframe for the proposed capital raising (private placement) has been extended. Lake Resources is in the process of finalising commitments from investors for the proposed placement under the new timeframe and seeking to finalise arrangements with the convertible securities holder. The Company anticipates updating the market with secured commitments and have the voluntary suspension lifted on or about 10 February 2020. A short form cleansing prospectus is required and will be lodged at the same time to permit the free trading of shares issued in connection with the proposed capital raising.

The shares of Lake Resources will remain in voluntary suspension from trading until such time as the Company is able to lodge a cleansing prospectus and provide a further update to the market regarding the capital raising, which is anticipated to be by 10 February 2020.

The Company remains committed to negotiating an early close out of the convertible securities facility with SBI Investments (PR), LLC (SBI) through a combination of both cash and the issue of shares, which will likely include an additional equity-based fee in consideration for the termination of the facility (see announcement 20 January 2020). The Company will provide an update in respect of the proposed early close out in due course.

A Share Purchase Plan (SPP) is also being formulated to provide existing shareholders an equal opportunity to invest alongside sophisticated and professional investors on similar terms as the placement. Further details in this regard will be announced in due course.

Managing Director Stephen Promnitz said: "Whilst this matter has caused a temporarily delay in closing our proposed placement, we have been encouraged by the level of interest received which reflects renewed investment interest in the lithium sector.

"The importance of sustainability has focused interest in Lake given our recently announced success producing high purity lithium carbonate from the Kachi brines using the disruptive technology of Lilac Solutions' direct extraction method. Engagement with battery and EV companies has ramped up pending larger quantities of samples being sent to potential off-takers.

"Our immediate focus is to complete this proposed placement and seek to reach a formal agreement for the early close out of the SBI convertible securities facility. The market has indicated that this would be seen positively given the upturn in the lithium sector. We thank shareholders and new investors for their patience as we work to deliver on the potential of the scalable and sustainable direct extraction process and its ability to produce a high quality product with low impurities." 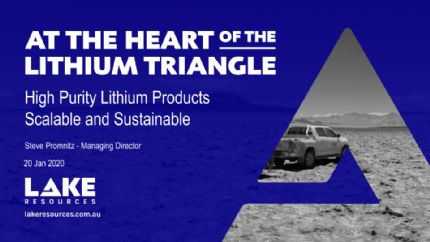