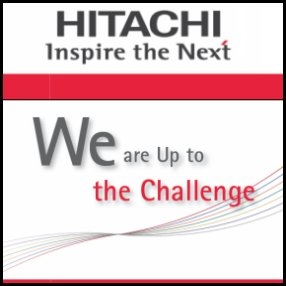 Hitachi Ltd. (TYO:6501) said Monday that it will raise up to 415.67 billion yen from an issuance of new shares and convertible bonds to fund capital outlays and pay back its loans. The combined number of new shares accounts for 34% of Hitachi's current shares outstanding.
Sydney, Nov 16, 2009 AEST (ABN Newswire) - Asian share markets broadly opened in positive territory. Japan's Nikkei was buoyed by the latest data showing that Japan's economy grew 1.2 per cent in July-September from the previous quarter, exceeding market expectations.

But the speculation about plans by Mitsubishi UFJ and others to boost capital through massive issuance of new shares weighed on the Japanese market. Analysts also warn that economy growth will slow as falling wages reduce the lure of subsidies on cars and electronics.

China's Shanghai Composite Index climbed above the psychological mark of 3,200 on Monday as a response to U.S. President Barack Obama's first state visit to China, in which allowing the yuan to rise is expected to be on the agenda.

Shares of Japan's Mitsubishi UFJ Financial Group Inc. (TYO:8306) dropped early Monday following a report it plans to raise its capital by 1.27 trillion yen by the end of the year. This would be the country's largest-ever capital increase through a public common-stock offering. The offer price has yet to be determined. MUFG implemented an 800 billion yen capital increase by offering common stock and preferred shares from December of last year to January.

Shares in Doosan Heavy Industries & Construction (SEO:034020) rose after the South Korean power plant and equipment maker said it would invest more in clean energy. It will invest an additional 700 billion won in clean energy by 2013. It has already spent some 300 billion won in it since 2004. The company expects to win five to six new orders for nuclear power plant equipment in the United States and China in 2010.

Hitachi Ltd. (TYO:6501) said Monday that it will raise up to 415.67 billion yen from an issuance of new shares and convertible bonds to fund capital outlays and pay back its loans. The combined number of new shares accounts for 34% of Hitachi's current shares outstanding.

Osaka Gas Co. (TYO:9532) says it will sell a 10% interest in its wholly owned electric power company to Oman's Qalhat LNG SAOC for about Y400 million. Qalhat LNG is the operator of the Qalhat liquefied natural gas project in Oman, in which Osaka Gas owns a 3% stake.