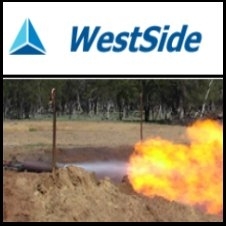 The proposed acquisition would result in WestSide acquiring a stake of up to 100% in the producing Dawson Seamgas CSG fields (PL 94 and ML gas rights) and up to 50% in two adjoining tenements (ATP 602P and ATP 564P/ PL94 North sublease). The ultimate interests acquired will be determined following resolution of pre-emptive and other rights of participation held by the existing joint venture partners.

The assets are located near Moura in central Queensland's Bowen Basin and are adjacent to WestSide's existing Paranui CSG project (ATP 769P). The assets are well positioned geographically, being the closest producing tenements to Gladstone and being adjacent to the planned pipeline route for the Surat to Gladstone gas pipeline.

The transaction presents WestSide a significant opportunity for further value creation through consolidation with the adjoining WestSide tenement. The Dawson Seamgas pipeline infrastructure has spare capacity to accommodate gas from both the Dawson Seamgas fields and from WestSide's adjacent and highly prospective Paranui field (ATP 769P). Located adjacent to the Dawson Seamgas field, WestSide's existing Paranui CSG project (ATP 769P) booked initial gas reserves of 135 PJ (3P) in June 2009 and an aggressive campaign is now underway to upgrade these reserves as a precursor to a Petroleum Lease.

If successful, this transaction is expected to transform WestSide into the second largest ASX listed dedicated CSG producer in Queensland. Commenting on the proposal, Angus Karoll, WestSide Chairman and CEO said:

"The proposed investment has the potential to transform WestSide from an explorer only business to a significant CSG producer, with sales contracts in place and a portfolio of exploration projects in various stages of development. Furthermore, access to Dawson Seamgas' existing infrastructure has the potential to provide an accelerated route to market for our existing Paranui CSG project, reducing the need for construction of capital-intensive export compression and pipeline facilities.

WestSide proposes to invest in the field to increase current production rates to meet the AGL contract rate. WestSide also believe there are significant resources yet to be certified which have the potential to increase the 2P and 3P reserves and also to convert 3P into 2P. Co-development agreements with the coal mining lease holders (Anglo and Mitsui) will enable WestSide to extract and sell CSG from within the mining and petroleum areas. If coal mining activities impact on WestSide's gas activities compensation is payable to WestSide.

Mitsui has the right to sell its interests to WestSide on proportionately the same terms as agreed with Anglo. If Mitsui were to exercise this option, WestSide could ultimately hold a maximum 100% interest in the Dawson Seamgas field and a maximum of 50% in each of ATP 564P and ATP 602P.

Mitsui holds rights of pre-emption over the Anglo interest in both the producing Dawson Seamgas field (PL 94 / ML's) and the adjoining exploration tenements (ATP 602P and ATP 564P). Molopo hold rights of pre-emption over each of the Anglo and Mitsui interests in the adjoining exploration tenements and the PL 94 North sublease. The resolution of all the various pre-emptive rights is expected to take up to 90 days.

WestSide is not obliged to complete the acquisition of the exploration tenements and sublease if it is prevented from acquiring the Dawson Seamgas field as a result of the pre-emptive rights being exercised.

WestSide's total acquisition cost is expected to be between A$55 million and A$80 million, depending on the ultimate ownership interest acquired, with a proportional reduction of WestSide's investment if WestSide seeks to work with a joint venture partner.

The transaction is subject to obtaining the necessary financing, which will be finalised once there is further certainty over the size of the ultimate interests to be acquired.

WestSide intends to provide existing shareholders the opportunity to participate by way of a pro-rata share issue. More details will be provided once there is further certainty over ultimate interests to be acquired.

- Resolution of the various pre-emption and participation rights;
- Indicative approval under relevant legislation and regulations of the transfer of the interests in the leases, tenements and pipeline licences to the new owners;
- Assignment of gas sales agreements to WestSide;
- Finance being obtained to the satisfaction of the WestSide Board; and
- Approval from the Foreign Investment Review Board, if required.