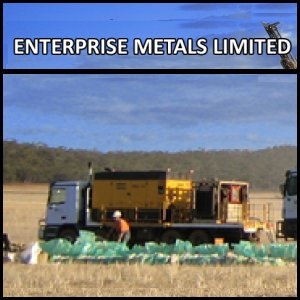 Australian Market Report of August 27, 2010: Enterprise Metals (ASX:ENT) Locates Bif at Burracoppin project
Sydney, Aug 27, 2010 AEST (ABN Newswire) - The Australian shares started lower on Friday. Overnight Dow Jones index fell below the psychologically 10000 mark on continued worries about US economic growth. Investors were increasingly nervous ahead of the US government's Friday release second-quarter GDP number. Shortly after the local market opened, the S&P/ASX200 Index was down 0.53 per cent, while the broader All Ordinaries Index lost 0.5 per cent.

The Australian dollar also opened slightly lower today amid uncertainty over the global markets. The local unit was trading at 88.62 US cents, down from yesterday's close of 88.75 US cents.

ASX:ENT) said it has located scattered outcrops of Archaean quartz-magnetite/banded iron formation ("Bif") at its Burracoppin project 280 km east of Perth in Western Australia. A number of the outcrops display intense alteration of magnetite to goethite/hematite, which is consistent with the Company's view that the area has the potential to contain significant tonnages of Direct Shipping Ore ("DSO") where intense weathering of Bif has occurred on deeply weathered structures.

ASX:UGL) today said it has, as part of the Singapore Sports Hub Consortium (SSHC), reached financial close with the Singapore Sports Council on a public-private partnership to maintain Singapore's premier sports, entertainment and lifestyle hub. UGL will provide facilities management services and lifecycle management to the existing Singapore Indoor Stadium commencing immediately and the remainder of greenfield Singapore Sports Hub venues at construction completion, valued at approximately A$500 million (or S$600 million) over the 25-year term.

ASX:BTV) has exercised its right to acquire the Roper River iron ore project in the Northern Territory. As part of the decision to acquire the Project, it is proposed that Batavia will change its name to Sherwin Iron Limited (

ASX:SHD). The acquisition follows a due diligence process which has included an extensive drilling program and preliminary metallurgical testwork. This program and the positive draft conclusions of the Scoping Study have confirmed the substantial potential of the Project.