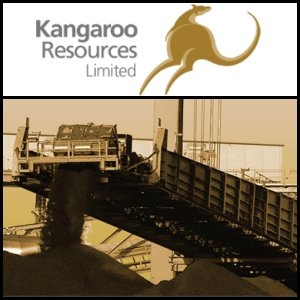 ASX:KRL) ("KRL" or the "Company") is pleased to advise that its subsidiary, PT Mamahak Coal Mining, has signed a key five-year mining contract, with an approximate value of US$270 million, with PT Putra Perkasa Abadi (www.ppacoal.com) to mine up to 4.5 million metric tonnes of coking coal from the Company's 100%-owned Mamahak Project in Indonesia.

The contract - which is scheduled to commence on 1 January 2012 and includes the removal of up to 90 million BCM of overburden - is designed to underpin the ramp-up of production from theMamahak Project to full commercial levels.

Together with other operational initiatives being implemented under Bayan's management, the new mining contract will cement the transition of Mamahak from small-scalemining operations seen to date to full-scale production.

The mining contract sets coal production targets over the 5-year period, with a target of up to 1 million metric tonnes per annum. The contractor will commence mobilisation of equipment in December, including overburden and coal equipment which will continue throughout the year, with the majority of the equipment due on site by Q3 2012. Initially the subcontractor will focus on construction of their own camp and support facilities and then transition into mining operations.

As part of the award of this contract, an upgrade of the existing haul road is planned with work scheduled to commence in Q2 2012 and to be completed by end of 2012.

The Company has also identified a new haul road alignment to a permanent barge loading facility on the Mahakam River that will significantly improve year-round barging access at Mamahak. A LIDAR topographic survey will be undertaken in Q4 2011 to complete the survey works required to commence the tender process for constructing the new road.

A tender is also in process for the construction of the new camp and support facilities, with award and commencement of construction expected to occur during 2012, with target completion of the first phase by end 2012.

Stage one of an exploration drilling program has been planned and the Company is currently in the process of selecting a drilling contractor to mobilize to site. This exploration program has been designed to increase the current Mamahak coal resource and provide the basis for the definition of a Coal Reserve and will be continuing throughout 2012.

KRL's Managing Director, Mark O'Keefe said: "We are pleased to have secured the future growth of the Mamahak project through our partnership with PT. Putra Perkasa Abadi. We believe that they will make a significant positive contribution and be instrumental in achieving our objectives for this Project. The Mamahak Project contains coking quality coal deposits which are consistent with our strategy of providing an even broader spectrum of coal products to the market."