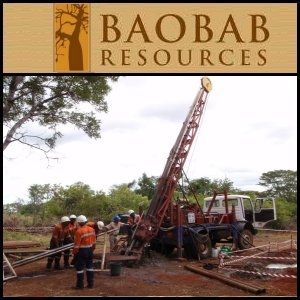 LON:BAO) ('Baobab' or the 'Company') through its wholly owned Mozambique subsidiary Capitol Resources Limitada ('Capitol') is pleased to announce that it has signed a Joint Venture Heads of Agreement ('JV' or 'HOA') with Australian exploration company Auroch Minerals NL (

ASX:AOU) ('Auroch' or 'AOU') in relation to the northern portion of the Company's Mundongaura Exploration Licence 1022L (the 'Area of Interest' or 'JV Area') in the Manica Province, Mozambique. The HOA is conditional upon Auroch completing due diligence before 30 Sept 2013.

- The Area of Interest encompasses the northern 18km2 of Baobab's 145km2 1022L Exploration Licence and overlies the along strike structural continuations of Auroch's 3Moz Manica Gold Project (3990C Mining Concession).
- The Area of Interest excludes the Mundonguara copper/gold/nickel trend where exploration programmes completed by the Company during the 2007 and 2008 field seasons culminated in the estimation of an open ended 3.1Mt JORC inferred resource @ 1.4% Cu.
- Auroch is earning into the Area of Interest via an unincorporated Joint Venture Agreement. The HOA has a four year, two-stage investment structure:
- 2-stage investment of up to US$1,500,000 to earn a maximum 80% interest in the JV Area.
- After completion of the second stage work programme Auroch has the option to purchase Boabab's 20% interest in the JV Area on terms mutually agreeable to both parties. Alternatively, Baobab may participate in further work programmes on a pro-rata basis.

Commenting today, Ben James, Baobab's Managing Director, said: 'The JV with Auroch opens up an exciting opportunity for both companies to realise the greater gold potential of the highly prospective, yet under-explored Manica Greenstone belt. The pedigree of Auroch's management team is impressive, with demonstrated experience and success in developing precious metal assets in southern Africa.

'Baobab retains exclusive control of the Mundonguara copper/gold/nickel trend where it has focused its exploration efforts to date. The Company is considering a number of funding alternatives to add further value in this exciting corner of Mozambique.'

Auroch wishes to explore for gold mineralisation in the JV Area and, if successful, consolidate the area with its existing tenure to develop the largest gold producing camp in Mozambique. For further information on Auroch Minerals and its Manica Gold Project, please visit the company's website (www.aurochminerals.com).

The legally binding Joint Venture Heads of Agreement outlines a two-stage investment to earn an increasing participatory interest in the Area of Interest:

The 1022L Exploration Licence is located in the western limits of the Manica Province of Mozambique, adjacent to the Zimbabwe boarder. The licence is centered on the decommissioned Mundonguara mine which was intermittently exploited for copper, gold and silver from the turn of the 20th century until its closure in 1989. In the mine's final phase, underground development extended to depths of over 200m below surface over a strike length of approximately 1km. The mine is within 2km of the international railway and 5km of the highway, linking the project with the port of Beira. National grid power lines pass within 40km of the mine.

During the 2007 and 2008 field seasons, the Company completed exploration campaigns comprising c.3,600m of underground diamond drilling, c.3,800m of surface RC drilling and c.2,400m of channel sampling and trenching in and around the Mundonguara Mine and its strike extensions. Exploration results culminated in the estimation of a Stage 1 JORC Inferred Mineral Resource on the 1km long Mine portion of the Mundonguara trend of 3.1Mt @ 1.4% copper (0.3% Cu lower cutoff grade) extending to a maximum depth of 200m below existing development. Mineralisation remains open at depth and along strike the where the Company's on-going exploration programmes have outlined a mineralized copper/gold corridor extending some 2.5km to the west.

A large footprint nickel in soil anomaly, supported by Induced Polarity (IP) geophysics, has been defined over a strike length of c.3km immediately south of the Mundonguara mine. Nickel analysis in drill, channel and trench sampling has recorded significant intercepts of up to 0.72% Ni. Baobab completed a 14 hole diamond drilling programme during 2011, targeting the nickel in soil anomalies and associated IP chargeability responses. Drilling failed to intersect significant mineralization and further work is required to better interpret the anomalies.

Gold in soil anomalies lie to the north of the mine sequence, within the Area of Interest, and are interpreted to represent the fault offset continuations of structures hosting Auroch's gold resource blocks.

The information in this release that relates to Exploration Results is based on information compiled by Managing Director Ben James (BSc). Mr James is a Member of the Australasian Institute of Mining and Metallurgy, is a Competent Person as defined in the Australasian Code for Reporting of exploration results and Mineral Resources and Ore Reserves, and consents to the inclusion in the report of the matters based on the information in the form and context in which it appears. 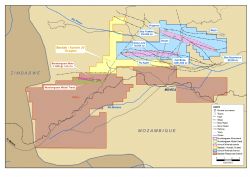