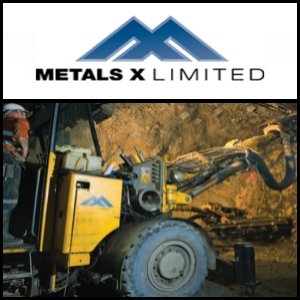 OTCMKTS:MTXXY) is pleased to advise that it has reached a binding agreement to acquire the assets that made up the Meekatharra Gold Operations of Reed Resources Limited (Reed) from the administrator of its subsidiary GMK Exploration Pty Ltd (GMKE).

The purchase price has a face value of approximately $7.7 million and is made up of:

The acquisition is conditional on obtaining:
- FIRB approval.

- Final approval by the creditors of GMKE.

The assets to be acquired include:
- The fully refurbished Bluebird CIP Process Plant (nominal 2.5 Mtpa capacity).

"This is a great acquisition for Metals X and a major step forward for our plans to bring our Central Murchison Gold Project to fruition. The metric of just over $2 per ounce of resource with all the plant and infrastructure in place is astounding value when compared with the $117M in capital expenditure we would require to build a new plant for our own ores. More importantly, this acquisition provides a low capital risk solution for us to add to our gold production without debt, without construction risk and without external pressures for delivery. It's also adds 3.5 million ounces to our existing 5.0 million ounces of Total Mineral Resource at the CMGP, adding even more value to the already large, long term option on the gold price inherent in Metals X's gold business."

Metals X plans to finalise a development strategy with the integrated projects and bring the region back into production in early 2015 building on our production at the Higginsville and South Kalgoorlie operations.

Metals X Limited is a diversified group exploring and developing minerals and metals in Australia. It is Australia's largest tin producer, a top 10 gold producer and holds a pipeline of assets from exploration to development including the world class Wingellina Nickel Project.

ABOUT THE MEEKATHARRA GOLD OPERATIONS (MGO)

The MGO is located in the Central Murchison Goldfields of WA, around and south of the town of Meekatharra.

The MGO is rich with infrastructure including a recently refurbished 2.5 Mtpa CIP plant, having been operated by Reed. All associated infrastructure to operate the plant is in place, apart from power generation equipment. A fully refurbished and newly extended 200 man camp is located near the Bluebird Mill. The previous owner, GMK Exploration Pty Ltd (GMKE), a wholly owned subsidiary of Reed Resources Limited had previously announced a Total Mineral Resource estimate of 63 Mt at 1.75 g/t Au containing 3.55 million ounces from a multitude of deposits. In addition they had announced Ore Reserves (at A$1300/oz) of 11.16 Mt @ 2.1 g/t Au containing 752,000 ounces as at 30 June 2012.

Metals X has not yet completed its own estimates but at this time there is no reason to doubt these numbers and it notes that there has only been minor depletion by operating since then. GMKE had mined the majority of the Bluebird deposit, which had an Ore Reserve of 1.39 Mt at 1.9 g/t Au containing 86,200 ounces during its operating phase.

The MGO was acquired by Reed in January 2011 for $28 million and after spending substantial additional capital on refurbishment and pre-development works, Reed officially commissioned the project and poured its first gold in January 2013. Reed had a vision to become an Australian mid-tier gold producer with a 3 stage strategy at the MGO:

- Stage 2 - to exploit a further 618,000 oz from further open pits and from the commencement of higher grade underground mining at the Paddy's Flat and the Reedy's mining centres.

- Stage 3 - to have been executed concurrently with Stages 1 & 2 was to use the latest in exploration technologies to convert the remaining 2.8 million ounces of resources to Reserves and make new discoveries.

The Reed strategy was halted at stage 1 as the Company began to struggle with the plant's operating performance, a declining gold price and increasing working capital requirements. In July 2013, Reed announced the deferral of Stages 2 & 3 until there was a sustained increase in the prevailing gold price and an improvement in market sentiment. Reed placed its subsidiary, GMKE in voluntary administration on August 16 2013. The administrator continued to operate the project until the end of 2013 after which 1.26 million tonnes at a head grade of 1.22 g/t Au was mined and 1.52 million tonnes at a head grade of 1.11 g/t was processed with a metallurgical recovery of 94.6% to produce 51,087 ounces of gold.

A sale process by the administrators, Ferrier Hodgson has been run since.

The CMGP is centrally located in the Murchison gold province, approximately 600 km northeast of Perth. The Murchison Province is the current focus of significant gold development activity in Western Australia. The Meekatharra Gold Operations are located approximately 100 km north of the CMGP.

The CMGP has an enviable pedigree within the region having historic production of 5.5 million ounces of gold and hosting two of only four historic individual mines that have produced over 1 million ounces of gold. The three key gold mining centres of the CMGP are Big Bell, Cuddingwarra and Day Dawn, south of Cue.

A Total Mineral Resource estimate of 5 million ounces (62.8 Mt @ 2.48 g/t Au) and Probable Reserves of 1.17 million ounces (15.5 Mt @ 2.36 g/t Au) have been estimated and were part of a Definitive Feasibility Study completed by Metals X's wholly owned subsidiary, Westgold Resources Ltd in early 2013. The ore feeds to that plant were from the re-processing of old tailings, re-worked and virgin open pits and a fundamental objective of the DFS was to have the longer term base feed coming from proved higher grade underground mines. The DFS concluded that an annualised production rate of approximately 100,000 ounces within an initial 11 year mine life was feasible.

Under that development scenario, the DFS estimated a capital cost of $117 million to build a new 1.5 Mtpa plant and to bring the project to production.

A falling gold price and a review of the regional opportunities led the Company to delay plans to build a new plant and await developments in the region. Metals X's strategy was to increase its gold production without exposing its shareholders to excessive capital risk. The Board determined that an ore processing solution would emerge that would be the catalyst for a development strategy for the CMGP.

The combined operations provide a platform for Metals X to build on its gold production. The acquisition metrics of $2 per ounce of resource, with all the plant and infrastructure in place, are extremely attractive. The capital expenditure envisaged in the DFS of $117 M is no longer necessary and has been replaced with this low cost acquisition of a 2.5 Mtpa plant, camp and associated infrastructure. There is no construction risk and no construction lead-time. The CMGP component of the combined project will have marginally higher operating costs as those ores will need to incur a cartage cost. Metals X believes that the additional operating cost and working capital risk, as opposed to the large capital cost to construct a new plant creates significant operating flexibility and avoids any obligations imposed by debt funding that would be required.

The consolidated profile of the merged projects is summarised as:

Metals X's strategy with this acquisition is to build on its substantial existing asset base in the Murchison and to establish a clear path to production while minimising the capital expenditure required.

Metals X's operating plan in the Murchison Region is to integrate and consolidate the CMGP and MGO to create a long-term sustainable gold mining operation to maximise shareholder returns while pursuing excellence in mining, exploration and safety practices.

Metals X believes the key to establishing a longer-term sustainable mining operation is to have higher-grade underground mines as the core provider of sustainable base load plant feed. Whilst sometimes re-optimised open pits can provide good short term additions and supplementary ore feed, the volatility of gold price, industry cost structures and geotechnical intricacies in an oxidized environment can distort the optimisation process. When applied without consideration to adequate returns and risk adjustment, a mining project can quickly turn from enthusiastic optimism to risk minimisation for a lender if the project is burdened with debt or larger royalty imposts.

Metals X believes the MGO and in particular the Paddy's Flat and Reedy Mining Centres have significant potential for long-term underground mining. Despite historically being the site of substantial underground mines up to the 1950s the recent approach to all these mining centres has been to bulk mine lower-grade open pits and tocut-back previously mined open-pits driven solely by pit-optimisation algorithms without appropriate consideration of economic return, progressive cash flow management and physical risk.

Metals X plans to develop an operational strategy for the MGO and CMGP over the nextsix months with a view to recommence production in calendar 2015. In the shorter term, Metals X intends to aggressively explore and assess development options in the MGO tenure. 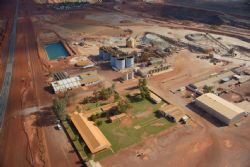