Formed in 1989 with only 10 employees and $50,000 in capital, we’ve grown into the largest independent producer of natural gas in the nation and the most active driller of new wells in the U.S. Headquartered in Oklahoma City, our strategy is focused on discovering, acquiring and developing conventional and unconventional natural gas reserves onshore in the U.S., primarily in the "Big 4" natural gas shale plays: the Barnett Shale of north-central Texas, the Haynesville Shale of East Texas and northwestern Louisiana, the Fayetteville Shale of central Arkansas and the Marcellus Shale of the northern Appalachian Basin. We have substantial operations in various other plays, both conventional and unconventional in the Mid-Continent, Appalachian Basin, Permian Basin, Delaware Basin, South Texas, Texas Gulf Coast and Ark-La-Tex regions of the U.S. Take a look at our roots. 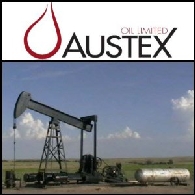 AusTex Oil Limited (ASX:AOK) is pleased to advise that recompletions on existing wells on the East Tonkawa Unit, Kay County Oklahoma are underway.

In the midst of the global financial crisis, the US mining industry and the energy resource sector continues to outperform the market and remains as an investment hotspot for many institutional investors from Asia.