Torch River Resources is a publicly traded junior mining exploration company with a number of mining claims. The Walker graphite property operated as a mine from 1890 through to 1920 and is located in an area known as the Grenville belt. It is approximately 30 km north-east of Ottawa between Montreal and Ottawa and has the potential for high quality graphite deposits that have been actively examined and reported on for many years in this area. The Company’s Mount Copeland molybdenum deposit lies within metamorphic rocks flanking the southern margin of Frenchman Cap Dome, 32 kilometers northwest of Revelstoke, British Columbia. The Fort Elden copper property is comprised of 18 mineral tenures that total 2,828.6 hectares in area. The mineral claims are located 100 km west of Fort St James, BC. The Red Bird deposit is comprised of three zones of molybdenum concentration referred to as the Main, Southeast and Southwest zones within a property totaling 1,836 ha (4,400 acres) and is located 133 km southwest of Burns Lake and 105 km north of Bella Coola. The Company plans to divest each of these properties through a sale or joint venture, thus allowing it to focus on building a graphite mining company. 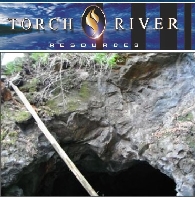 Torch River Resources Ltd. ("Torch" or the "Company") (CVE:TCR) (FRA:WNF) (OTCMKTS:TORVF), is pleased to announce that it is working towards the terms of a proposed agreement to merge with Plumbago Refining Corporation ("PRC"). The goal of the proposed merger is to create a combined company that will be in a better position to advance the development of twenty (20) of their 49 former highgrade lump graphite mines located in southern Sri Lanka.