FRA:LK1) announced today a further boost for its growth plans, following strong investor support that will facilitate the development of sustainable and scalable direct extraction technology at its flagship Kachi Lithium Brine Project.

The technology developed by Lake's partner, Lilac Solutions has received backing from a fund led by Bill Gates and other global business heavyweights and offers a potential sustainable solution for the lithium brines industry.

Under a placement to sophisticated and professional investors, Lake has now secured a total of approximately $3.37 million before costs, while the Share Purchase Plan announced on 10 February 2020 has been oversubscribed having secured some $2.1 million. Lake is now considering upsizing the SPP to accommodate the increased demand from shareholders, with such funding to help speed the Company's development plans.

Lake has completed its upsized private placement, with $1.915 million received before costs and the issue of 47,875,000 million shares, at an offer price of $0.04 per share, to sophisticated and professional investors. This brings the total amount raised under the placement to an amount of approximately $3.37 million. The Company is preparing a supplementary prospectus which will address these matters which is anticipated to be lodged on or around 28 February 2020.

The SPP and Shortfall Offer, to raise up to $1.5 million before costs, has been oversubscribed following strong support. The Company is currently considering upsizing the SPP Offer and Shortfall Offer and an announcement will be made shortly concerning a Supplementary Prospectus.

The SPP closes this Friday, 28 February 2020 (Closing Date). Applications and funds must be received by the Company by the Closing Date. 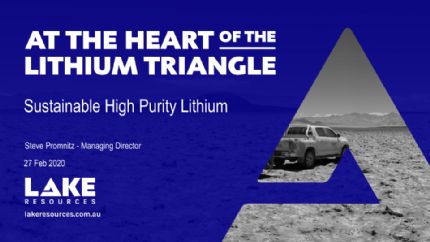