FRA:5AM), is pleased to announce further drill results as part of the 2020 Exploration Drilling Program, for the Fraser's North and South areas.

The Company has so far received assay results for 30 RC drill holes in these areas since drilling commenced in early June. Numerous significant potentially economic results have been received from 29 out of the 30 holes which include some of the highest grade results yet returned from any drilling at the Yangibana project since 2014.

The majority of drilling planned for Fraser's North and South was designed to complete 40m x 40m drilling to extensions of the 650m long Fraser's Open Pit Mineral Resource at shallow depths that form a critical part of the early mine schedule for the Yangibana Project.

The exceptionally high grades from Fraser's South (up to 18.57%) gives us a lot of confidence that we are in a rare earth zone richly endowed with huge potential, particularly given how little exploration it has seen.

Hastings is now well on its way to achieving its goal of extending mine life through testing our existing geological understanding of the Fraser's deposit. We are now intersecting consistent mineralisation over a wide area and there remains plenty of opportunity to significantly expand the Mineral Resource in the future with open mineralisation along strike and down-dip requiring further drilling in the future.

The entire Fraser's North to South mineralised trend is emerging as a large consistent zone which is characterised by thick near surface intercepts with grades that would potentially support a large open pit operation".

The drilling at Fraser's South has intercepted the predicted ironstone positions and returned consistent mineralisation results, with some of the best TREO results ever received from Yangibana.

Hastings remains confident that this mineralised trend will continue in a south-easterly direction based on surface mapping and points to the potential of further development of the Mineral Resource within the Fraser's South corridor.

Additional future work will include step out exploration drilling along strike and drilling down dip, where the mineralisation to date has only been tested to 40m below the surface. 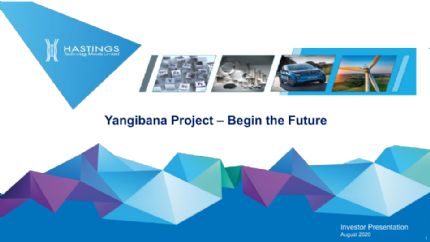