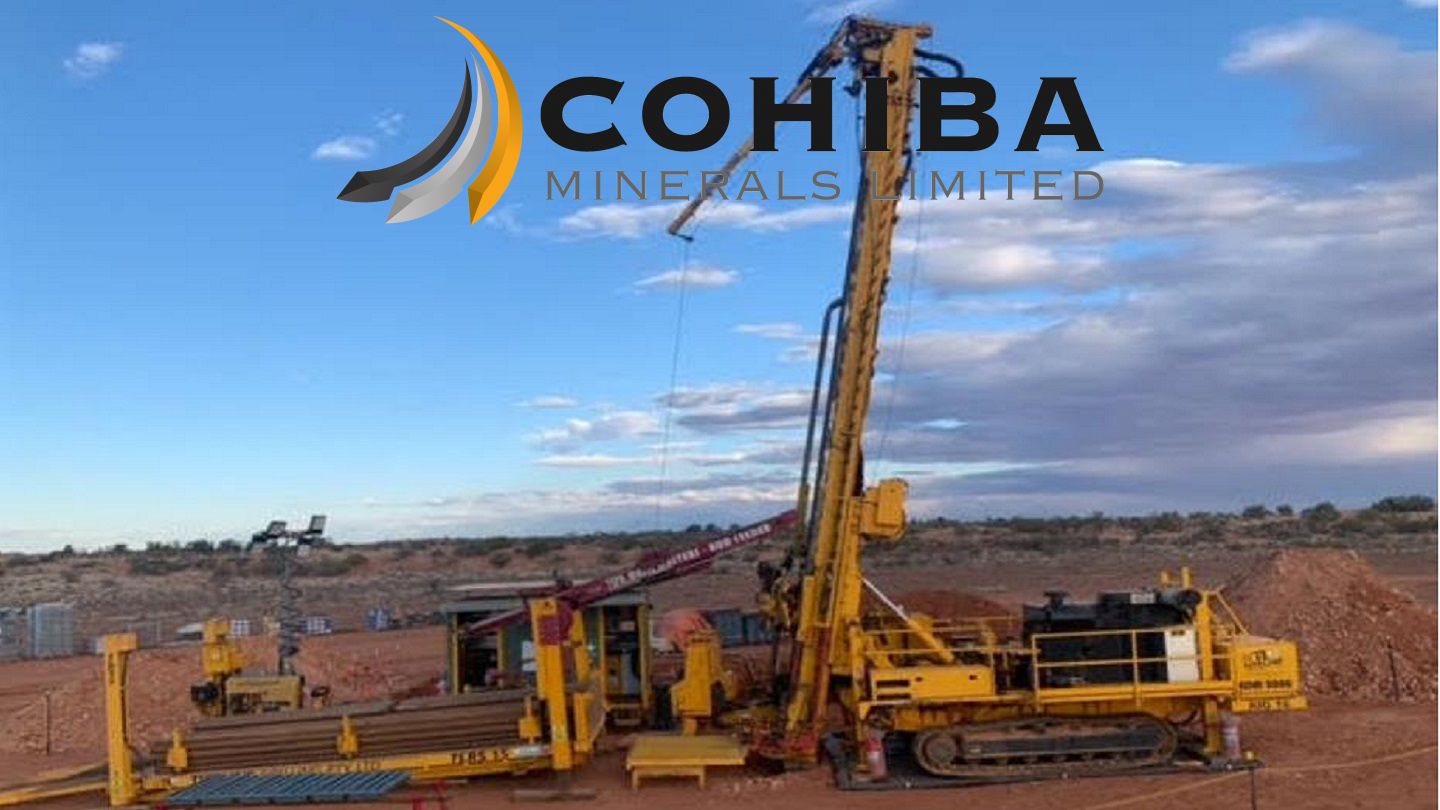 CHKMF:OTCMKTS) is pleased to announce significant copper, gold and silver intersections from the Bluebush Fault at the Horse Well project (Figure 1*).

Cohiba's CEO, Andrew Graham says, "The Horse Well Prospect remains a key IOCG target area within the Gawler Craton and we are committed to investigating it to the fullest extent possible. The Bluebush Fault is a significant dilational structure which coupled to the major NW-SE structural corridor and pervasive low-level copper mineralisation in multiple holes provides ample justification for ongoing exploration. The separate target zone around HWDD08 also confirms that this area is highly prospective for IOCG mineralisation. Cohiba is continuing to apply in-depth technical assessment on every drill hole with the aim of narrowing its search area and maximising its likelihood for exploration success."

HWDD07 was drilled at Horse Well prospect during the period 29 July 2022 - 3 September 2022, with basement being reached at 930.35m down hole and completion depth of 1519m. The target was the south extension of the Bluebush Fault, which had been previously identified in drillholes HWDD04, HWDD05 and HWDD05W1. The specific aims of the hole were to gain more confidence in the exact orientation of the fault, which was successfully intersected in HWDD07, and to test the strike extension to the south in a region of magnetic low.

In the hanging wall of the Bluebush Fault, quartz-grey hematite-chalcopyrite-pyrite veins were commonly encountered. Hematite replaces the niche of magnetite, indicating a relative increase in oxidation. The indicated orientation of Bluebush Fault is of strike 0-20deg and dip of 60-70deg to the west. The upper Bluebush Fault (1141.8-1167.2) was strongly altered to red feldspars accompanied by minor actinolite, and moderate mineralisation in the form of quartz-siderite-chalcopyrite-pyrite veining.

Quartz-siderite and quartz-hematite+/-magnetite veins associated with chalcopyrite and pyrite occur sporadically to the bottom of hole.

Immediately below the basement contact at 930m (downhole) remobilization and enrichment of silver and gold occurred in the paleo-weathering horizon when the basement was exposed and eroding prior to the deposition of the Pandurra formation ~1.5 billion years ago and subsequently, along this contact. Similar enrichment is also observed in HWDD04, HWDD05 (only partially assayed) and HWDD05W1. Copper is generally depleted in this zone although may be re-deposited at the base in the mineral bornite.

The remobilization and enrichment of silver and gold in the paleo-weathering zone over 300m strike length (Figure 2*) is a positive indication of substantive mineralisation in this region, analogous to a very strong soil anomaly at surface.

Levels of copper, gold and silver are pervasively and significantly elevated throughout HWDD07 relative to the background geochemical values (Graph 1*), and are indicative of a wider basement geochemical anomaly present in all the Bluebush drilling (Figure 4*) and extends the interpreted anomalous strike length to 500m (Figure 2*).

*To view the full release with tables and figures, please visit:
https://abnnewswire.net/lnk/UIC87892 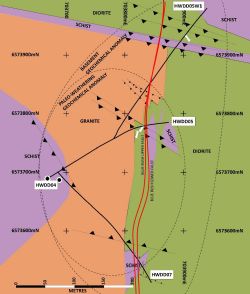 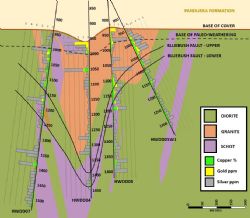 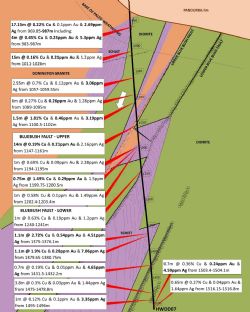