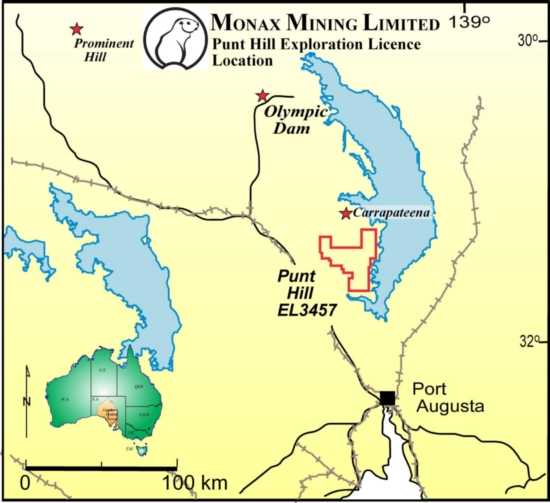 Monax today announced that an initial ten hole drilling program, costing around $1 million, will be undertaken on the tenement (EL 3457). However, the company plans to double the program to 20 holes, a total investment of up to A$2 million, if the initial drilling results are encouraging.

At least 14 high priority drill target areas were identified from an assessment of the company's 1x1 km gravity survey data conducted late last year. These anomalies are interpreted to be structurally controlled along regional northwest - southeast trending faults in a geological environment similar to the Carrapateena discovery, Olympic Dam and Prominent Hill.

Data from more than 1800 gravity stations is currently being collected in a detailed 250 metre by 250 metre grid over the gravity anomalies previously identified by Monax during its regional surveys.

"This data will allow us to model potential Olympic Dam style deposits and pinpoint the location of drill holes" Mr. Schwarz said.

An aeromagnetic survey at 100 metre line spacing is also being conducted over most of the tenement in August. "This survey will greatly advance our understanding of the geology and mineral potential of the tenement" Mr. Schwarz stated.

"A drill rig has been confirmed, Aboriginal heritage clearances have been completed, and we expect to commence drilling in the second week of August," he said.

Ten drill holes are planned in the first phase of drilling and, if encouraging results are obtained, a further ten will be drilled.

Monax believes its targets are substantially shallower than at Carrapateena which intersected mineralisation at 470 metres. "Exploration is thus significantly easier and any potential mine developments will be much more economic on Punt Hill" Mr Schwarz said.

"The only previous drill hole that reached basement within our tenement did so at 250 metres, and we believe most of our targets will be in the 250-400 metres range."

"Even so, we are prepared to drill to 750 metres to make sure we test the targets thoroughly."

The information in this report that relates to Exploration Results, Mineral Resources or Ore Reserves is based on information compiled by Mr M P Schwarz, who is a Member of the Australian Institute of Geoscientists. Mr Schwarz is employed full time by the Company as Managing Director and, has a minimum of five years relevant experience in the style of mineralisation and type of deposit under consideration and qualifies as a Competent Person as defined in the 2004 edition of the "Australasian Code for Reporting of Exploration Results, Mineral Resources and Ore Reserves" Mr Schwarz consents to the inclusion of the information in this report in the form and context in which it appears.