Yesterday the Australian share market was closed in thin trading. The benchmark S&P/ASX200 index ended down 26.8 points, or 0.7%, at 3687. The All Ordinaries index gained 16.8 points, 0.5%, to 3638.9. Market is expected to follow the US trends, but the rising oil and commodities prices may give resources sector a push.

On the Sydney Futures Exchange, the March Share Price Index futures contract was 32 points higher at 3713.

The Australian dollar has opened firmer, gaining support from a higher oil price and expectations of more rate cuts by the European Central Bank. At 0700 AEDT, the Australian dollar was trading at $US0.7150/53, up from Monday's close of $US0.7130/38.

Israel's ground offensive in Gaza and a dispute between Ukraine and Russia over gas imports pushed oil prices above $US48 a barrel Monday. Light, sweet crude for February delivery rose $US2.47 cents to $US48.81 a barrel on the New York Mercantile Exchange.

Dun & Bradstreet National Business Expectations Survey revealed that more than half of 1200 companies from various sectors were preparing for a drop in sales, while 59 per cent expected lesser profits. The last time with such a bad reading was during the second quarter of 1990, when Australia was in recession.

RBA is keeping with tradition and not meeting today, despite the economic downturn. The RBA meets on the first Tuesday of every month, except January. Interest rate cut is not expected until the next meeting.

The Australian Industry Group - Commonwealth Bank performance of services index shows that the service sector is facing tough business conditions. Based on a poll of 200 firms, the index posted a reading of 39.3 points, rising 1.5 points from November. A reading below 50 means the sector is contracting.
M&A News

Perilya(ASX:PEM) said it would be forced into a deeply discounted capital raising or a fire sale of assets if shareholders did not approve a A$45.5 million equity injection that would hand control of the company to Chinese smelter Zhongjin Lingnan(SHE:000060).

Black Range Minerals Limited(ASX:BLR) said the company has agreed to acquire a 100% interest in the Jonesville Coal Project in Alaska, USA, with host JORC measured, indicated and inferred resource of 130 Mt and well positioned for Asian markets in China, Taiwan Korea and Japan.

Mirabela Nickel Ltd(ASX:MBN) says the rise in the nickel price last week may explain a recent surge in its share price. Mirabela shares were up 38.89 per cent on Monday after a lift of 5.26 per cent on Friday.

The forestry company Gunns(ASX:GNS) said it is looking to secure its next tranche of funding for a controversial pulp mill in Tasmania after the Federal Government declined to give full approval for the A$2 billion project to proceed.

Thousands of Telstra(ASX:TLS) workers are set to resume rolling strikes and bans on working overtime this weekend after a lull in industrial action during the Christmas-new year break. Telstra shows no sign of backing down from its refusal to re-enter talks with unions.

Leighton Holdings(ASX:LEI) said the will write down the values of some investments and cut its first-half net profit by A$170 million due to the global financial crisis. It said its first-half operating profit would be around A$270 million, also up 8% on a year earlier.

Hillgrove Resources Limited (ASX:HGO) awarded an exploration licence to P.T. Akram Resources on the Bird's Head Peninsula in West Papua, Indonesia. The area is considered highly prospective for world class copper-gold and gold deposits. Trenching conducted during 1992 identified significant mineralisation that included up to 70.95g/t gold in the area. 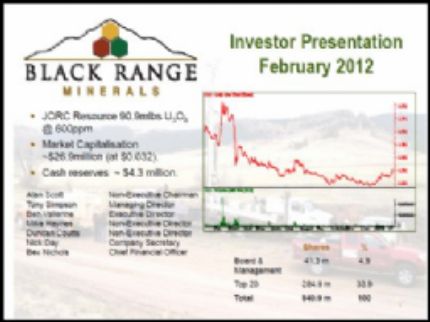