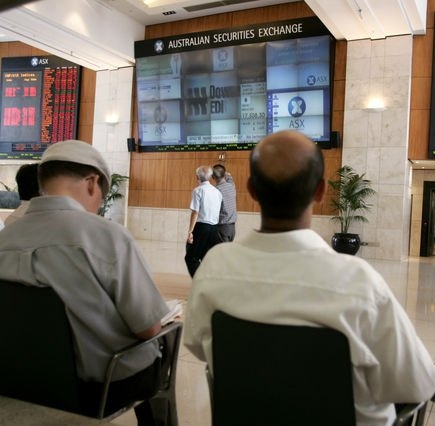 Yesterday the Australian shares posted a modest gain as the market saw the rising oil prices and increased optimism about the outlook for commercial banks. The benchmark S&P/ASX200 index rose 18 points, or 0.54 per cent, at 3345.5, while the broader All Ordinaries index was 15.9 points higher, or 0.48 per cent, to 3297.4.
"It's interesting to read announcements from the 'Old World' and 'New World'. Banks and retailers are all reporting huge losses, and it seems to be no end to it," said Thomas Su, Research Director of Money Cat Consulting. The market will start focus to younger consumers who basically care much less about recession. Mr. Su also says one of the good reasons why Apple is doing well is its target market is at relatively younger consumer markets, which also have a much higher representation in terms of workforce in IT, E-Commerce and Media industries - many are still hiring.

The latest Australian Bureau of Statistics figures showed that Capital expenditure rose 6per cent seasonally adjusted in the December quarter to A$24.9billion, as the mining sector continued a strong growth. However, economists say the impact of a rapid slowdown in major world economies remains a key risk to Australia in 2009.

Annual pay, without bonuses, grew by 1.6 per cent in the November quarter and at a rate of 5.5 per cent year-on-year, the ABS said.

QBE Insurance Group (ASX:QBE) said it was "well-placed to consider" further acquisitions despite the financial crisis, after the insurer reported a satisfactory result with only 3.5 per cent fall in its full-year net profit to A$1.9 billion. QBE is believed to emerge as a bidder for Suncorp-Metway's (ASX:SUN) insurance operations.

Babcock & Brown Infrastructure (ASX:BBI) was forced to sell a majority stake in New Zealand's Powerco before the due day of its A$100 million debt. B&B Infrastructure agreed to sell a 58 per cent stake in Powerco for NZ$423 million to Queensland Investment Corp yesterday.

Lend Lease (ASX:LLC)will slash 2000 jobs worldwide to cope with its half-year loss, taking its overall workforce to about 10,000. Its Australian workforce will be cut by about 400 positions.

ANZ (ASX:ANZ) will cut its fiscal 2009 dividend by 25 per cent. The bank says net profit fell 11 per cent in the four months ended January, after a credit provision charge of A$800 million and writedowns associated with A$11.2 billion worth of credit intermediation trades.

Gunns (ASX:GNS) says it was in talks with a number of potential partners for its proposed A$2.2 billion Tasmanian pulp mill by the end of April. Gunns booked a net profit for the first half of fiscal 2009 of A$33.6 million, up 126% on the prior corresponding period.

Toll Holdings Ltd (ASX:TOL) has posted a 33 per cent fall in first-half net profit for the six months to December 31, 2008 of A$158 million, down from A$237m in the prior corresponding period.

Macquarie Group (ASX:MQG) said in a statement to ASX that it was not planning a capital raising in response to the market speculation.

Paperlinx (ASX:PPX) posted a first-half net loss of A$560.9 million after writing down the value of its Australian unit. The paper maker reported a net profit of A$35.3 million a year earlier.

Crown Ltd (ASX:CWN) has reported a first half net loss for the half year ended December 31 was A$409.70 million, largely due to a A$547.5 million writedown on the carrying value of assets. But it says revenue growth at its Australian operation continues to be solid.