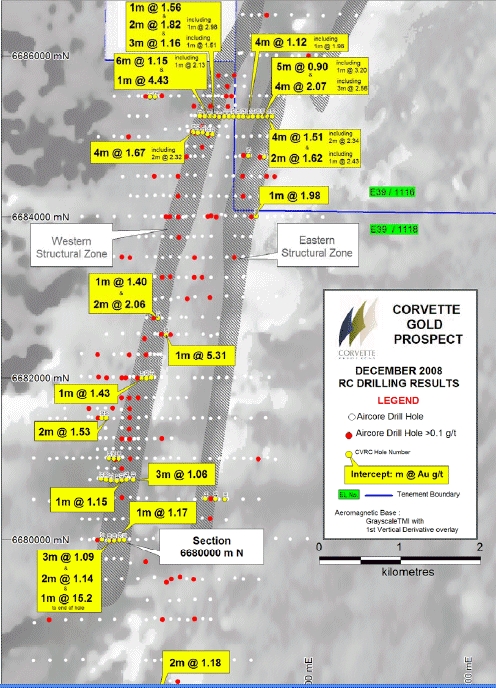 The 2,200km2 Plumridge project is situated on the margin of the Albany Fraser Province and the reworked transitional margin of the Yilgarn Block, which hosts the 5 Moz Tropicana-Havana gold project, 60km north of Corvette.

The results have further extended the mineralised gold zone at the Corvette Prospect on Plumridge, and have produced gold intersections up to 15.2 grams per tonne which remain open at depth.

The first batch of results from this initial phase of RC at Corvette, reported to the ASX on 5 March, had identified significant and widespread gold mineralisation along both the western and eastern structural zones, interpreted as major zones of shearing and deformation at least 8km long. The current results now extend the prospective western shear zone by a further kilometre, and include significant intersections in hole CVRC 048:

Managing Director, Patrick McManus said "These results are important in showing that high grade gold exists within the 8km of mineralisation along the western structural zone".

"We are encouraged to see high gold values at Corvette. With over $2.5M cash, we are well placed to follow up on these very exciting results from the first RC programme at Corvette, which has indicated several targets for further drilling".

Multi-element assays were carried out on composite samples from RC holes encompassing the western and eastern structures as an orientation study. The results indicate primary gold mineralisation has a strong association with anomalous bismuth, tellurium, tungsten, beryllium and molybdenum, suggesting these elements may be used as pathfinders to gold mineralisation. These element associations are similar to the metal associations reported from both the Tropicana-Havana deposit, and the Challenger Gold Mine.

The exceptional results from Section 6680000 in Hole CVRC 048 will be followed up by deepening this hole and expanding RC coverage along the section, and along strike. The company also plans to follow up significant intersections on a further 11 sections as reported previously. Multi-element assaying will be expanded to assist in design of follow-up drilling.