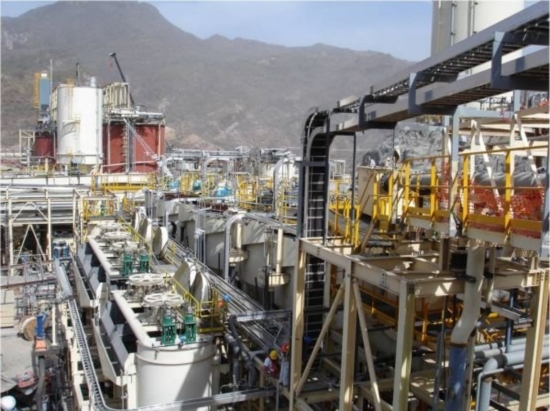 "We are extremely pleased with the on-time commencement of production at Palmarejo, Coeur's newest mine project and one of the largest new silver/gold mines in the world," said Dennis Wheeler, Chairman, President and Chief Executive Officer of Coeur. "We are proud of the work accomplished by our Palmarejo team, including the local workforce, who completed construction on schedule and on budget. Combined with production from our other new silver mine - San Bartolomé in Bolivia - Coeur expects silver production to increase 66% this year to approximately 20 million ounces."

The mine recently was awarded the Socially Responsible Business Distinction for 2008 by the Centro Mexicano para la Filantropia (CEMEFI) for the mine's demonstrated excellence in social responsibility. The award is a national recognition of Coeur Mexicana and its ongoing contributions to community and strategies and policies in this area. The award also recognized the way Coeur personnel conducts its business in Mexico, and the positive working environment for employees and contractors.

Recent photos of projects and other information can be accessed through company website at http://www.coeur.com

This press release contains forward-looking statements within the meaning of securities legislation in the United States, Canada, and Australia, including statements regarding anticipated operating results. Such statements are subject to numerous assumptions and uncertainties, many of which are outside the control of Coeur. Operating, exploration and financial data, and other statements in this presentation are based on information that Coeur believes is reasonable, but involve significant uncertainties affecting the business of Coeur, including, but not limited to, future gold and silver prices, costs, ore grades, estimation of gold and silver reserves, mining and processing conditions, construction schedules, currency exchange rates, and the completion and/or updating of mining feasibility studies, changes that could result from future acquisitions of new mining properties or businesses, the risks and hazards inherent in the mining business (including environmental hazards, industrial accidents, weather or geologically related conditions), regulatory and permitting matters, risks inherent in the ownership and operation of, or investment in, mining properties or businesses in foreign countries, as well as other uncertainties and risk factors set out in filings made from time to time with the SEC, the Canadian securities regulators, and the Australian Securities Exchange, including, without limitation, Coeur's reports on Form 10-K and Form 10-Q. Actual results, developments and timetables could vary significantly from the estimates presented. Readers are cautioned not to put undue reliance on forward-looking statements. Coeur disclaims any intent or obligation to update publicly such forward-looking statements, whether as a result of new information, future events or otherwise. Additionally, Coeur undertakes no obligation to comment on analyses, expectations or statements made by fourth parties in respect of Coeur, its financial or operating results or its securities.