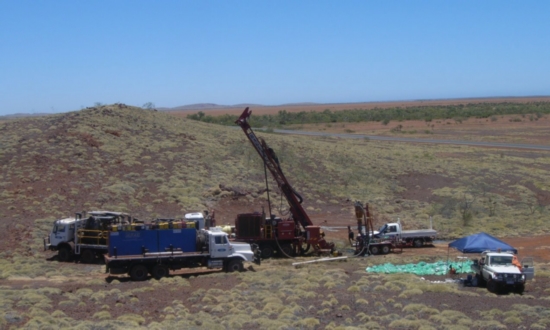 Miaree Project
Perth, April 30, 2009 AEST (ABN Newswire) - Red River Resources Limited's (ASX:RVR) Blythe Project is held under a joint venture with Iron Mountain Mining Limited (ASX:IRM). RVR have 50% of the Blythe project and are contributing equally with IRM to exploration costs. Reverse circulation (RC) drilling was carried out over the Hampshire, Sea Slug, Nolan's Hill, Kara North, Kara East, Kara South, and Kiwi's Prospects during the June and September Quarters of 2008 and initial analyses were received during 2008. A further screening survey of RC cuttings from the Kara North Prospect, utilising a Niton XRF field analyser, was carried out during January 2009. As a consequence, over 570 new samples were submitted for XRF analysis for tin and iron. The laboratory results have substantially increased the number of +0.1% Sn intersections encountered by the Kara North drilling and include 41m @ 0.22% Sn in drill hole KNRC 036 as well as 51m @ 0.15% Sn in KNRC 021. The magnetite-tin mineralisation occurs over a zone 900m long by 400m wide.

Subsequent to the receipt of this data two diamond drill holes, KND 001 and KND 002, totalling 247m, have been drilled into the western side of the Kara North Prospect and these have confirmed the presence of thick zones of magnetite-tin mineralisation as well as providing information on the structural setting of the deposit. KND 001 confirms a very broad envelope of >0.1% Sn and includes 6m @ 0.47% Sn between 19.4-25.4m.

Samples of mineralisation were submitted for preliminary metallurgical testwork by Nagrom during the quarter.

The Kara North Prospect area is located 27 kilometres south of Burnie Port and is 7 kilometres away from the railway line connecting western Tasmania with Burnie. Burnie contains a stable work force with a strong mining culture as well as large workshops and is therefore an excellent base for a potential mining operation at Kara North.

In collaboration with Joint Venture partner Iron Mountain Mining Limited a total of 58 reverse circulation (RC) holes for a total of 5,800m were drilled on 13 drilling lines across the interpreted position of the Miaree Magnetite Trend in the December 2008 quarter. Analytical results received in February 2009 have confirmed the presence of extensive magnetite mineralisation within the Miaree Magnetite Trend aeromagnetic anomaly, southwest of Karratha in the Pilbara region of Western Australia.

This RC drilling program was the first to be drilled on the Miaree Project and as such tested a variety of targets in order to calibrate aeromagnetic responses to subsurface geology and mineralisation. Therefore, to test the extent of the mineralisation relative to aeromagnetic

responses, not all drillholes were positioned to return optimal results.

Most importantly, the results from drillholes that targeted aeromagnetic peaks encountered magnetite beds with true widths ranging between 50-85m at grades of around 30% Fe including an intersection of 150m @ 30.1% Fe in drillhole MK002 that ended in mineralisation.

Drillholes located on the flanks of the anomaly generally encountered thinner magnetite beds grading 25-32% Fe but still contained intersections of 34m @ 32.2% Fe and 40m at 28.1% Fe.

The Miaree Magnetite Trend occurs in the Cleaverville Formation, the same geological unit that hosts the large, ca 1.6 billion tonne, Cape Lambert magnetite deposit, immediately east of Roeburne and Wickham, held by China Metallurgical and Mining Company. Aeromagnetic data clearly confirms the large magnetite resource at the Cape Lambert deposit, as it does also for the Balmoral Deposit, a 2 billion tonne deposit 20 kilometres south of Cape Preston. Aeromagnetic field strengths over the Miaree Magnetite Trend are similar to those over the Cape Lambert and Balmoral Deposits.

At 31 March 2009, the company had available funds of approximately A$2,609,000. The Appendix 5B highlights the quarter's cash activities and other relevant financial information.

For the complete Red River Resources Quarterly Report, please see the link below;