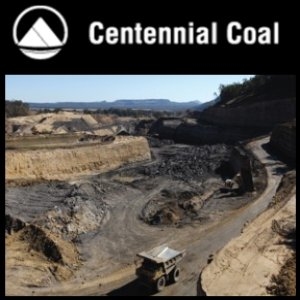 Centennial Coal (ASX:CEY) has reported a 7 per cent year-on-year fall in fourth-quarter sales to 3.3 million tonnes. But Centennial enjoyed a record quarter for export sales and demand from steelmakers for metallurgical coal has improved.
Sydney, July 23, 2009 AEST (ABN Newswire) - Wall Street finished mixed overnight. Dow and S&P 500 indices ended their rising streak while Nasdaq posted its 11th straight rise led by Apple and Yahoo. Investors started to lock in their profits from a series of rallies driven by earnings reports.

Australia's consumer price index fell to a 10-year low in the second quarter. Australia's headline consumer price index (CPI) rose 0.5 per cent in the June quarter, according to the Australian Bureau of Statistics. The annual rate of increase in core inflation was a solid 3.9%, still well above the central bank's desired 2%-to-3% target range. Treasurer Wayne Swan said inflation is expected to remain subdued over the near term as the effects of the global recession continue to impact on the domestic economy. The RBA forecasts a fall in core inflation to an annual pace of 1.5% by the end of 2011.

Pacifica's (ASX:PBB) director Patrick Burroughs yesterday recommended shareholders accept German manufacturing company Robert Bosch's takeover offer. Independent expert Deloitte Corporate Finance said the offer at A$0.23 a share for the last 23.3 per cent of the brakes maker was fair and reasonable. Bosch holds about 76.6 per cent of Pacifica stock and last month launched a cash offer for the remaining shares.

Air New Zealand (NZE:AIR) announced a formal opposition to the Virgin Blue's (ASX:VBA) planned tie-up with US carrier Delta Air Lines (NYSE:DAL) on the Australia-US route. This opposition comes just days after the Singapore Airlines (SIN:C6L) backed Tiger Airways declared it will lodge objections to the joint venture with regulators.

Ports and rail operator Asciano Group (ASX:AIO) has completed a A$2.35 billion rights issue and placement last month, but still required shareholder approval to use A$1.55 billion of that amount. Asciano's rail subsidiary, Pacific National, has signed a new 10-year contract to haul coal for Xstrata Coal in NSW. The contract is expected to generate total net revenue of more than A$800million for Asciano over the life of the deal.

Centennial Coal (ASX:CEY) has reported a 7 per cent year-on-year fall in fourth-quarter sales to 3.3 million tonnes. But Centennial enjoyed a record quarter for export sales and demand from steelmakers for metallurgical coal has improved.

BHP Billiton (ASX:BHP) posted a 10% drop in fourth-quarter iron ore output to 27 million metric tons. BHP's production report for the June quarter/June year revealed higher than forecast production in most commodity groups. Analysts expect BHP to report a net profit of about $US9.86 billion for the 2008/09 financial year, down from a record-smashing $US15.39 billion in 2007/08.

AWB Ltd (ASX:AWB) will close its disastrous Brazilian operations, which will lose up to A$65 million this financial year, and slash the company's full-year profit. AWB expects to report a pre-tax profit of A$90-A$100 million but this may be wiped out by significant items, including the Brazilian losses.

The Commonwealth Bank of Australia (ASX:CBA) said that its funds under management rose 8 per cent to A$138.2billion in the three months to June 30, compared with the March quarter.

FKP Property (ASX:FKP) has raised around A$120 million from its retail entitlement offer. The company said the offer was 46 per cent subscribed, considered pleasing given it was renounceable.

Australian packaging group Amcor Limited (ASX:AMC) said it had agreed its lawsuit with Cadbury (LON:CBRY) after the confectioner sued for A$236m for over-charging on materials. Amcor was sued by Cadbury in 2004 after the packaging group's board told Australia's competition regulator that employees were involved in price-fixing with rival Visy Group.

Wesfarmers (ASX:WES) owned supermarkets Coles says it won't rule out a second round of petrol discounts like the one that whipped both consumers and rivals into a frenzy last week. Woolworths (ASX:WOW) chief executive Michael Luscombe also kept open the possibility of another offer.

National Australia Bank (ASX:NAB) has raised A$2 billion from institutional investors, with new shares being priced in an overnight bookbuild at A$21.50 each.