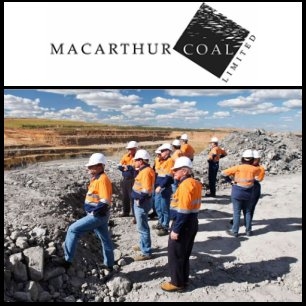 As demand from traditional buyers like Japan, Taiwan and Korea sagged in the second half, Macarthur started selling material to Chinese buyers for the first time and Hollows said "nontraditional" buyers accounted for 55% of sales in the second half of fiscal 2009 ended June 30.

Chief Executive Nicole Hollows said she sees positive signs for a recovery in demand for the company's pulverized, or PCI, coal.

Hollows said China was providing an important market in the short term and would also be a market for output from Macarthur's future expansions.

Traditional buyers of Macarthur's low volatile coal are now recovering, she said, and a positive sign is that spot prices for metallurgical coals are now above contract prices.

Major shareholders of Macarthur Coal include CITIC Group, ArcelorMittal (NYSE:MT) and POSCO (SEO:005490), holding a total of 47% interest in the company.