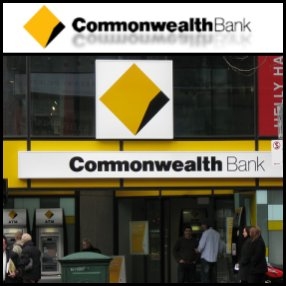 The big four banks have raised their standard variable mortgage rates by the same amount as the Reserve Bank's 25 basis points increase on Tuesday. The ANZ (ASX:ANZ) and Westpac (ASX:WBC) will increase the rate to 6.06 per cent while NAB (ASX:NAB) and Commonwealth Bank's (ASX:CBA) rate will rise to 5.99 per cent.
Sydney, Oct 9, 2009 AEST (ABN Newswire) - VIDEO: Overnight the US stocks closed higher on the positive Alcoa earnings and better-than-expected weekly jobless claims and consumer spending. Investors were also encouraged by the US retailers' first same-store sales gains in more than a year.
Yesterday the encouraging job data pushed the local market to its highest in a year. The benchmark S&P/ASX200 index was 1.6 per cent higher, or 72.9 points, to 4768.6 points; the broader All Ordinaries index gained 67.5 points, or 1.4 per cent, to 4763.3. Meanwhile, the Australian dollar hit a fresh 14 month high of 90.15 US cents in the minutes after the ABS data was published.

The Australian Bureau of Statistics said the unemployment rate in September fell to 5.7 per cent from 5.8 per cent in previous month. The better-than-expected result, as a sign of economy recovery, could give the Australian central bank stronger confidence to further raise its official interest rate in November.

Treasury Secretary Ken Henry has warned there could be a further reduction of 100,000 jobs and a further detraction of 1.5 per cent from GDP if the Federal Government's stimulus scheduled to impact in 2010/11 was cancelled. Government's next forecast will likely include stronger forecasts for gross domestic product growth and a peak unemployment rate lower than the 8.5 per cent forecast in the time of the budget.

Australian iron ore explorer United Minerals Corp (ASX:UMC) is expected to announce that it has received a takeover offer from BHP Billiton (ASX:BHP), which is tipped as a potential suitor. The expected offer comes after the A$27.7 million deal with China Railways Materials Commercial Corp to acquire 11.4 per cent stake in United Minerals. United Minerals on Friday requested a suspension in trade of its shares pending an announcement on a potential change of control transaction.

Polaris Metals NL (ASX:POL) said in a statement on Friday neither of the takeover offers proposed by Lion-Asia Resources and Mineral Resources (ASX:MIN) is "clearly superior". Polaris shares are currently trading on ASX at or slightly above the A$0.60 per share offered by Lion-Asia.

Babcock & Brown Infrastructure (ASX:BBI) yesterday launched a A$1.8 billion recapitalisation plan aimed at addressing the company's A$1.2 billion of debt. Canada based asset management specialist Brookfield will emerge with a cornerstone shareholding up to 40 per cent. Brookfield will take 100 per cent of PD Ports in the UK, and BBI will also spin off Australian Energy Transmission and Distribution and Cross Sound Cable.

Consumer goods company GUD Holdings Limited (ASX:GUD) said it intends to make an off-market takeover offer for all the shares it does not already own in Breville Group (ASX:BRG). GUD is offering all Breville shareholders one GUD share for every 4 Breville shares. The offer values Breville at A$322 million.

The big four banks have raised their standard variable mortgage rates by the same amount as the Reserve Bank's 25 basis points increase on Tuesday. The ANZ (ASX:ANZ) and Westpac (ASX:WBC) will increase the rate to 6.06 per cent while NAB (ASX:NAB) and Commonwealth Bank's (ASX:CBA) rate will rise to 5.99 per cent.

Elders Limited (ASX:ELD) said it will not participate in the Forest Enterprises Australia (ASX:FEA) capital raising. Elders holds a 31.1 per cent equity interest in FEA through its wholly owned subsidiary. As a result, Elders' FEA interest will be diluted from 31.1 per cent to approximately 13.5 per cent.