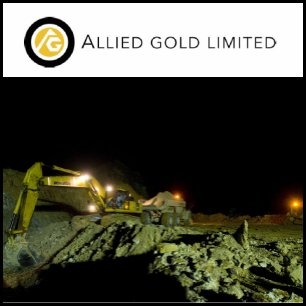 Allied Gold (ASX:ALD) has unveiled its plan to raise A$158 million capital. Allied said the cash would be used largely to develop its recently acquired Gold Ridge mine in the Solomons. In September, Allied announced a scrip-only takeover bid for Australian Solomons Gold (TSE:SGA).
Sydney, Nov 17, 2009 AEST (ABN Newswire) - Overnight US stocks finished in a fresh 13-month high as energy and material sectors are boosted after the better-than-expected Japanese economy growth. The market was also inspired as Federal Reserve Chairman Ben Bernanke's said that interest rates would stay low. The US government data showed that retail sales rose 1.4 per cent in October, also exceeding market expectations.

Today the Australian share market opened firmer after strong lead from overseas. Yesterday the local shares remained its gains in a positive sentiment. The benchmark S&P/ASX200 index closed up 48.8 points, or 1 per cent, at 4755.2 points, while the broader All Ordinaries index advanced 51.2 points, or 1.1 per cent, to 4773.8 points.

The Australian dollar opened at a fresh high of 93.77 US cents this morning, on the back of a negative sentiment against the strength of US dollar. During the offshore session, the Aussie dollar broke through the 94 US cents level and traded between 93.26 and 94.07 US cents.
Key Economic Facts and Figures

The National Australia Bank survey of small to medium enterprises (SMEs) shows that profit outlook, customer confidence and business conditions have improved significantly in the September quarter. The gauge has reached positive territory for the first time since the same quarter in 2008.

The Reserve Bank of Australia (RBA) is scheduled to publish the minutes of its November 2 board meeting today. The central bank is expected to clarify the outlook for monetary policy.

Tianshan Goldfields Limited (ASX:TGF) and Corvette Resources Ltd (ASX:COV) have agreed in principle to enter into a conditional merger implementation agreement to merge the two companies by way of a Scheme of Arrangement. Under the Scheme, Tianshan will acquire all issued shares in Corvette in exchange for the issue of shares in Tianshan. The consideration for the Scheme will be two Tianshan shares for every one Corvette share held on the implementation date of the Scheme. The merged company will have a market capitalisation of approximately A$60 million.

Allied Gold (ASX:ALD) has unveiled its plan to raise A$158 million capital. Allied said the cash would be used largely to develop its recently acquired Gold Ridge mine in the Solomons. In September, Allied announced a scrip-only takeover bid for Australian Solomons Gold (TSE:SGA).

ThinkSmart Limited (ASX:TSM), an international computer and office equipment financing company, expected strong EBITDA growth in 2010. The company has reaffirmed its profit guidance for 2009 with the ongoing strength of the group's Australian operations and the improved performance of UK electrical retailing partner DSG International (LON:DSGI).

Goodman Group (ASX:GMG) today said in a statement that Goodman Australia Industrial Fund will undertake A$320 million of equity raising initiatives to strengthen its balance sheet and position it well to benefit from the recent signs of improving economic conditions. The fund will raise A$120 million from the introduction of 12 month mandatory distribution reinvestment plan effective 1 July 2009, and a A$200 million pro rata non-renounceable 1 for 10 rights issue at a fixed price of A$0.75.