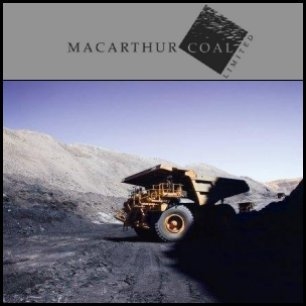 Macarthur Coal (ASX:MCC) said coal sales have recovered following the global financial crisis, with steel production increasing. The company also has confirmed plans to double production during the next five years. Its traditional customers had resumed buying contracted volumes and were seeking more coal.
Sydney, Dec 2, 2009 AEST (ABN Newswire) - US stocks Wednesday climbed to near the peak of the year after Dubai's debt restructuring plan. The market was also supported by the optimism about the upcoming holiday shopping season while retailers Staples and Guess saw positive earnings in third quarter and provided guidance above market expectations.

The Australian sharemarket has opened higher after the rises in global share markets. Gold also rose to above US$1200 an ounce. Yesterday the local sharemarket ended the day stronger. The benchmark S&P/ASX 200 index rose 17.7 points, or 0.38 per cent, to 4719 points, while the broader All Ordinaries index advanced 0.37 per cent to 4733.1 points.

The board of RBA yesterday decided to raise the cash rate by 25 basis points to 3.75 per cent. The RBA raised interest rates for a third month as the global economy has resumed growth and the central bank expects it to continue next year. The risks of a serious contraction in the economy have passed and that a gradual withdrawal of monetary stimulus was needed. Economists also tipped that RBA will raise rates again to keep inflation consistent with the target over the years ahead.

Agricultural chemicals supplier Nufarm (ASX:NUF) has placed a three-week extension on the deadline for talks on a A$2.8 billion takeover deal from Sinochem Corp, as the Chinese company said analysis of material gathered during due diligence had taken longer than expected. The two companies planed to work on an exclusive basis to conduct due diligence and negotiate a transaction implementation agreement before December 3 this year. Nufarm said Sinochem is still interested in acquiring the company, but Nufarm will be opened to other offers when the exclusivity period with the Chinese chemical trader ends.

Telstra (ASX:TLS) has confirmed plans to float China's top real estate website, SouFun. Telstra says it will sell down its 51 per cent stake in SouFun Holdings Ltd, when the business floats on the Hong Kong stock exchange. Telstra paid US$254 million for its investment in SouFun in August 2006.

Fund manager Perpetual Ltd (ASX:PPT) has reaffirmed its first half 2010 profit guidance as client investor confidence improved. The company also will continue to pursue acquisitions of high net worth advice practices. Perpetual's forecast assumes underlying profit for the December 2009 quarter will be in line with the September quarter. Net profit after tax for the first half will be between A$40 million and A$50 million.