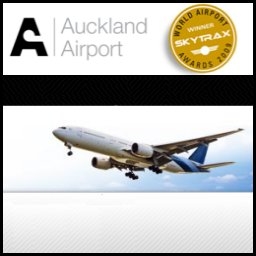 Auckland International Airport Ltd. (NZE:AIA) ( ASX:AIA) said Monday it has agreed to purchase from Westpac ( ASX:WBC) a 24.55 per cent stake in North Queensland Airports.
Sydney, Jan 12, 2010 AEST (ABN Newswire) - Yesterday the Australian sharemarket gained as the Chinese government released a report showing that China's exports jumped 17.7 per cent in December. The Australian dollar was stronger on Monday on the positive Chinese trade data and improved domestic jobs data. The benchmark S&P/ASX200 index advanced 38.6 points, or 0.8 per cent, at 4950.7, while the broader All Ordinaries index was up 39 points, or 0.8 per cent, to 4981.2.

On Tuesday the Australian Bureau of Statistics is to release its report of dwelling finance commitments for November.

ASX:AIA) said Monday it has agreed to purchase from Westpac (

ASX:WBC) a 24.55 per cent stake in North Queensland Airports, the operator of Cairns and Mackay airports in Queensland. The A$132.8 million acquisition is to increase its exposure to Asian markets. The The investment represents approximately 5% of Auckland Airport's total assets.

ASX:CBH) said it was considering a conditional and incomplete takeover proposal by Belgian zinc producer Nyrstar NV (EBR:NYR). This is below the bid price of 13.5 cents per share, which values the target at A$147.7 million. All of these discussions are incomplete and insufficiently definite to warrant disclosure, the company said.

ASX:RHC) says it is to acquire a majority interest in French peer Groupe Proclif SAS, for A$142 million. The acquisition will be part of a wider deal with French insurer Predica, a subsidiary of banker Credit Agricole, to jointly develop a business in the acute care sector in France.

ASX:NOD) has sharply downgraded its earning guidance for the year ending 30 June 2010. Nomad now forecasts that its net profit after tax for the full FY10 financial year will be a loss of about A$2 million on revenue of approximately A$250 million. This compares to a profit after tax forecast of A$10 - 12 million previously advised. The results have been impacted by the failure to secure the level of work, additional costs and continuing pressure on the margins following the global financial crisis, the company said.

ASX:MIR) said its net profit for the half year ended 31 December 2009 was A$5.6 million, 24 per cent down from the previous corresponding period. "The market's had a big rise and its anticipating a series of good results in the 2011 year," Mirrabooka managing director Ross Barker said. The company said it is close to being fully invested, and that the market has recovered to a point of fair value.

ASX:KNH) is expecting operating profit for the year ended December 31 to be "substantially higher" than that of the previous year.