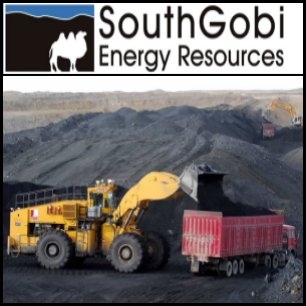 Canadian company SouthGobi Energy Resources Ltd., (CVE:SGQ) a unit of Ivanhoe Mines Ltd.(TSE:IVN) ( NYSE:IVN), has received Hong Kong listing approval for its planned US$300 million initial public offering.
Sydney, Jan 18, 2010 AEST (ABN Newswire) - US stocks fell on Friday led by financial sector as JPMorgan Chase reported heavy fourth-quarter losses on mortgage and credit card loans. Shares in Intel also declined despite it reported a biggest gross profit margin in its history, as investors grew fearful that the stock may be near its peak. For the week, Dow index fell 8.54 points, or 0.08%.

TYO:7261) is considering dissolving its partnership with Ford Motor Co. (

NYSE:F) for the joint production of cars in China by 2012 to meet the growing demand in the market, said sources. Mazda plans to withdraw from Changan Ford Mazda Automobile Co. in Chongqing, a joint venture of Mazda, Ford and a Chinese automaker. Ford and Changan will run the Chongqing plant while the three partners' Nanjing joint venture will be transformed to a joint company of Mazda and the Chinese automaker to boost Mazda's production in China.

NASDAQ:BARE) for US$1.7 billion. After the acquisition Shiseido will become the fourth-biggest cosmetics company from number six in the world by sales. The company said it expects the acquisition to lift its U.S. sales to 14% from 8%, and its overall operating profit margin to 9.1% compared with the previous fiscal year's 7.2%.

SHA:600019), China's largest steelmaker, said its 2009 net profit fell about 11 percent from a year earlier as turnover declined by more than a quarter. Baosteel's net profit was of 5.75 billion yuan, down from 6.46 billion yuan a year earlier. The company also said total sales fell 26 percent to in 2009, without citing reason for the decline.