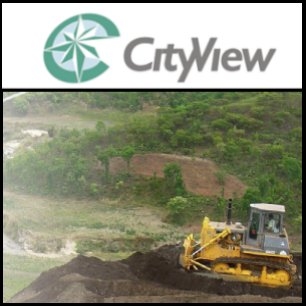 ASX:CVI) (OTC:CTVWF) advises that following extensive due diligence into the proposed coal fines project carried out under the supervision of Mr Philip Rand, the Board has resolved to proceed with the acquisition of Velvogen (Pty) Ltd ("Velvogen").

Metro Crown Group Limited ("Metro") will now transfer 74% of the shares in Velvogen in consideration of the assignment of the Fortitude Minerals Limited loan note of US$10,172,807. The loan note has been fully impaired in the accounts of CityView and the assignment is to be effective on February 1, 2010. Mr Rand will be appointed forthwith to the Board of Velvogen, instead of Mr M. Smyth as originally envisaged.

To accelerate the project, it has been agreed between the parties that Velvogen will not itself be required to construct a coal briquette plant. Instead, Metro will supply to Velvogen by March 2010 a plant capable of processing 110 tonne/hour of high grade coal fines. CityView's objective is to generate an annual cash flow of up to US$8 million from the plant. Drafting of a definitive feedstock agreement, off-take sales agreement and operating agreement has commenced.