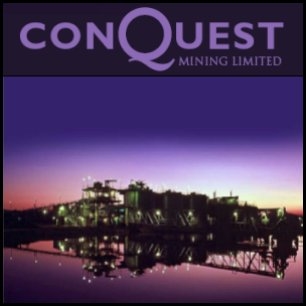 PINK:CQMLF) is pleased to announce that Mr Jake Klein has accepted the position of Executive Chairman of the Company. Mr Nicholas Curtis and Mr James (Jim) Askew will also be appointed to the Board as Non Executive Directors. The appointments are subject to shareholder approval and will take effect on the date of an Extraordinary General Meeting (EGM) to be called as soon as practicable.

A number of other Board changes are contemplated:

- Mr John Terpu, Mr Bruno Firriolo and Mr Joe Radici have indicated their intention to step down from the Board upon approval of the appointments of Messrs. Klein, Curtis and Askew.

- Mr Klein will replace Managing Director, Mr John Terpu. Mr Terpu's employment as an executive will cease on the appointment of Mr Klein.

- Mr Firriolo's employment as an executive will also terminate if shareholders approve the appointment of the new Directors.

Mr Klein was previously President and CEO of Sino Gold Mining Limited where along with Mr Curtis (founder and Chairman until 2005) and Mr Askew (Director from 2002 and Chairman from 2005) he managed the development of the company into the largest foreign participant in the Chinese gold industry.

Sino Gold Mining was listed on the Australian Stock Exchange in 2002 with a market capitalisation of A$100 million and was purchased by Eldorado Gold Corporation in late 2009 for over A$2 billion. The company became an ASX/S&P 100 Company, operating two awardwinning gold mines and engaging over 2,000 employees and contractors in China.

Mr Klein's consultancy, DAK Corporation, was recently appointed by Conquest to lead a Strategic Review (as announced on 4 February 2010) following the release of the Definitive Feasibility Study of the Silver Hill project, with a key intention to maximise shareholder value and optimise earnings.

"I am enormously pleased that Jake Klein has agreed to take on this role leading the Company and building a development and production focussed team," Mr Krasnoff said.

"His experience demonstrates the exceptional leadership he brings to a gold company, which will be the catalyst for increasing shareholder value for all Conquest shareholders."

"After leading the Company for over 10 years, I am happy to hand the leadership reins to a proven gold industry leader who can build on the solid foundations of Conquest's assets and relationships to take the Company to the next level."

- Subject to shareholder approval at the EGM, an Incentive Options package consisting of 2 tranches of 13,500,000 options each, with the following terms and conditions:

-- The 2 tranches vest in 1 and 2 years, respectively, subject to meeting a performance target that CQT's TSR(2) exceeds the median TSR of a group of comparable gold companies, as recommended by independent advisers and agreed by Mr Klein and the Company.

-- In the event of a future share placement by the Company during the term of the Options, an anti-dilution clause would apply to the Options such that additional options would be granted pro rata at a strike price 15% above the share price of such a placement.

Terms of engagement for Non-Executive Directors Curtis and Askew

- Subject to shareholder approval at the EGM, an Incentive Options package consisting of 2 tranches of 1,250,000 options each, with the following terms and conditions:

-- In the event of a future share placement by the Company during the term of the Options, an anti-dilution clause would apply to the Options such that additional options would be granted pro rata at a strike price 15% above the share price of such a placement.

(1) The strike prices represented an average 30% premium to the VWAP of A$0.2294 that prevailed between 5/2/10 (the day after CQT's ASX Announcement re 'DFS Results') and 4/3/10 (when the initial Offer was made to Mr Klein and new Non-Executive Directors.)

Nick Curtis has been Chairman of rare-earths miner Lynas Corporation since 2004. Prior to that Nick was President and Chief Executive Officer of Lynas. He has over 20 years background in mining and finance including founding Sino Gold Limited, an Australian public company with gold mining assets in China and serving as Chairman for five years until November 2005.

Jim Askew is a mining engineer with over 30 years broad international experience as a Director/Chief Executive Officer for a wide range of Australian and international publicly listed mining, mining finance and other mining related companies. He has served on the board of numerous resource public companies, which currently include Oceana Gold (Chairman), Ausdrill Ltd, Asian Mineral Resources Ltd, Golden Star Resources Ltd and Eldorado Gold Corporation, (which acquired Sino Gold Limited).