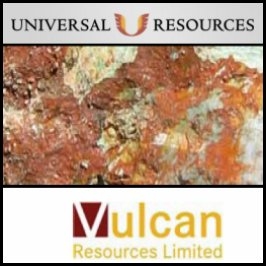 ASX:URL) became effective on 19 February 2010. The new company has been focussed on development studies at the Outokumpu copper project. This release provides an update on this exciting project.

The Outokumpu copper project is located in eastern Finland and comprises the Luikonlahti processing plant and some 15.6 million tonnes of copper resources in 7 deposits within 45km of the plant with significant cobalt, gold, nickel and zinc credits*.

The Kylylahti copper deposit is the largest deposit in the area and will be the first mine to be developed. The company is finalising engineering studies and intends to make a decision on commencement of operations in the second quarter of 2010. Both Luikonlahti and Kylylahti are permitted, are on granted mining leases and both have been the subject of feasibility studies.

Preparations for a potential start to operations at the Outokumpu project are well advanced and we are pleased to report substantial progress in a number of areas:

The company has purchased the freehold land underlying the planned site for the Kylylahti decline portal and for the location of other key mine infrastructure. The majority of other infrastructure will be located on land owned by the Municipality of Polvijarvi who are supportive of the mine development and will be compensated for the use of land under the legislative formula applied to the granted mining leases.

A number of mill and crusher parts have been secured for the refurbishment of the Luikonlahti mill.

To return capacity to 550,000-600,000tpa the plant requires the re-instalment of a third mill that was removed some years ago. A suitable used mill shell has been found and secured via an option to purchase.

An engineering review of previous cost estimates for the refurbishment and upgrade of the Luikonlahti plant are well advanced and no material differences from the prior owners cost estimate of EUR7m have been found to date. Processing Kylylahti ore may require additional concentrate filtration capacity, temporary concentrate storage facilities and other minor adjustments to processing equipment, however these will not result in any material increases to the total cost of refurbishment.

Metallurgical testwork to confirm amendments required to the flowsheet adopted in the Kylylahti Definitive Feasibility Study ("DFS") is nearing completion. Copper and gold recoveries have been confirmed and at the likely production grades recoveries are expected to be higher than those reported in the Kylylahti DFS largely due to an increase in the grade of production. Zinc recovery testwork is incomplete but indications are that a saleable product can be achieved. The company is also investigating making a sulphur (pyrite) concentrate for sale and will defer further testwork on optimising cobalt-nickel concentrates pending a decision to proceed with mine development based on copper-gold-zinc revenues alone.

Mine design studies are being undertaken to increase mine production head grade above the DFS reserve grade and to match the mine production rate to the Luikonlahti mill capacity of 550,000-600,000tpa. These studies indicate that higher grades are achievable with a modified mining method of longitudinal longhole open stoping with cemented rock fill.

Mine development requirements have been materially reduced through removing the need for primary and secondary stopes as envisaged in the DFS. The mining process has been simplified through a simpler stoping schedule and the replacement of costly paste backfill with cemented rock fill. Mine design is now moving to detailed scheduling and stope design.

Mine design studies have assumed that the project receives revenue from sale of copper-gold concentrates only and mine economics, i.e. break-even grades and profitability, are based on a 'copper only' approach. Additional revenue may be achieved through sales of other products (Zn, Co, Ni, S).

Application has been made to a Finnish Government Agency (Centre for Economic Development, Transport and the Environment) for financial assistance (grant) of up to EUR2m (A$3.2m) to support infrastructure development and other costs at both the Luikonlahti and Kylylahti sites. A response is expected in Q2 2010.

The financing requirement for the development of the Outokumpu project will be finalised in Q2 2010. The Luikonlahti plant delivers significant capital cost savings and it is clear that the costs will be materially below the estimate made in the Kylylahti DFS. The company expects to fund the development through its existing cash resources and a modest loan facility. Discussions are advancing with a number of parties interested in providing a mix of debt and equity funding in exchange for securing the right to copper concentrate marketing and sales. These parties include funds, traders and smelters. Kylylahti concentrate is a high quality product which is produced close to Nordic and European markets.

The company expects to complete the update and integration of the Kylylahti and Luikonlahti studies in Q2 2010 and will announce all technical outcomes together with financial and production metrics at that time.

* Details of the resouce estimates for the Outokumpu area are to be found in the Vulcan ASX Release dated 16 November 2009 and can be found on the Universal website Investor centre. Vulcan releases are no longer available on the ASX platform.