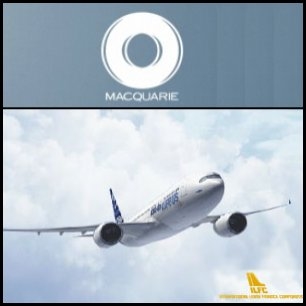 Macquarie Group Limited (ASX:MQG) said that Macquarie Bank Limited (MBL) has entered into an agreement to acquire an aircraft operating lease portfolio International Lease Finance Corporation (ILFC), a subsidiary of American International Group (NYSE:AIG).
Sydney, April 14, 2010 AEST (ABN Newswire) - The Australian market rebounded to above 5000 points today after Wall Street gained on hope of upbeat US corporate earnings. On Wednesday, investors would look to consumer sentiment data from Wespac and Melbourne Institute. The local market fell back to below the 5000 points level on a weaker performance in Asian markets. Today Asian shares were mostly higher following the positive lead from Wall Street.

The Westpac/Melbourne Institute consumer sentiment index fell by 1 per cent in April from March. In annual terms, the consumer sentiment index rose a seasonally adjusted 25.2% in April. This is a result better than expected, signalling the confidence might be resilient to higher interest rates. The Reserve Bank of Australia has raised the official cash rate for five times since October last year.

NYSE:AIG). MBL has agreed to acquire 53 aircraft from ILFC, and will transfer the purchase rights on six of these aircraft to other Macquarie subsidiary. The purchase will be funded from existing cash reserves. The aggregate purchase price for 53 aircraft is US$1.987 billion. Macquarie Group said the acquisition builds on its existing leasing business in the aircraft sector and substantial experience in the leasing of assets through its Corporate and Asset Finance division which has loans and leases under management of A13.8 billion as at the end of 2009.

ASX:CBH), has rejected the third takeover proposal for CBH from Belgian zinc refiner Nyrstar (EBR:NYR), citing the bid undervalued CBH shares. Toho zinc said in a statement that, the revised proposal from Nyrstar, the world's largest zinc metal producer, is incomplete, non-binding and is not an offer. Nyrstar expects to acquire all of CBH's ordinary shares and convertible notes. Toho Zinc owns 24.1 per cent ordinary shares and 50.6 per cent of its convertible notes in CBH.

ASX:VTA) has confirmed that it is selling its 50 per cent interest in the Australian Bulk Alliance (ABA) joint venture, a grain handling and supply chain services provider, to Japan's Sumitomo Corp (

The purchase was triggered as a result of the change in control of Viterra's Australian operations, arising from Viterra's acquisition of ABB Grain in September last year. ABA's storage network consists of eight country sites in Victoria and New South Wales as well as the ABA grain terminal at the Port of Melbourne.

ASX:IXR) have signed an Exploration Joint Venture Agreement to form a joint venture to explore for, and facilitate the development of, copper-gold projects on IMX's Mt Woods tenements in South Australia. OZ Minerals, which holds a 13 percent stake in IMX, has an immediate 51 per cent interest in the joint venture.

An exploration program is scheduled to commence immediately. IMX's Mt Woods tenements are largely contiguous with OZ Mineral's tenements which contain the Prominent Hill copper mine in South Australia.

IMX Managing Director said the joint venture means a very significant increase in expenditure at Mt Woods, well in excess of what IMX could afford.

ASX:PPX) said today that it is in the final stage of exit from its Tasmanian manufacturing operations.
It will close its Burnie Mill in Tasmania, with the balance of operations already closed. On completion of the closure, PaperlinX will solely become a merchant with business distributing paper, sign and display, graphics solutions and industrial packaging to a wide range of customers in Australia, New Zealand and Asia, Europe and North America.

The company now is focussed on completing refinancing programme and on ensuring its competitive position is as robust as it can be in the uncertain economic times.