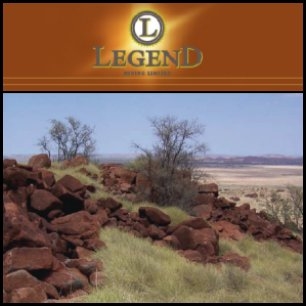 Legend Mining Limited (ASX:LEG) March 2010 Quarterly Report
Perth, April 28, 2010 AEST (ABN Newswire) - The highlight of the quarter was the result of the aeromagnetic survey over the Mesondo and Ngovoyang tenements in Cameroon and the subsequent decision of Legend to exercise its right to acquire the 90% interest in Camina SA (Camina).

Camina has recruited six Cameroon geologists and support staff and is now a functioning exploration company with field work concentrating on the targets in the Eseka region.

PINK:LGDMF) Cameroon Exploration Manager, Mr John Stockley, arrived in Cameroon on 4 February 2010 and is now residing in Yaounde where Camina's corporate office is based. An exploration camp has been established just outside the town of Eseka and the assays from the first batch of rockchip samples, which included nine samples of +65%Fe, were released to the ASX on 14 April 2010. Further results from the next batch of rockchip samples are expected shortly.

The results of the Gum Creek (Woodley) magnetite inversion modelling are still awaited.

The Cameroon Project comprises granted exploration permits and an application covering an area of approximately 3,900km2 and is considered prospective for iron ore and gold. Discovery of 50Mt of direct shipping ore (DSO) is the primary target, however itabirite ore (lower grade but potential very high tonnage) will also be targeted. The Ngovayang project area has the added advantage of being well served by access infrastructure including rail and road networks to and from the port city of Douala.

During the quarter, extensive aeromagnetic and radiometric surveys were completed over the Ngovayang and Mayo Binka areas. The results identified the occurrence of itabirite on a larger scale than previously known information indicated at Ngovayang, confirming the iron ore prospectivity of the project. Based on these results, Legend decided to exercise its right to acquire 90% of Camina SA, as approved by shareholders in December 2009, see ASX announcement 5th February 2010.

Aeromagnetic/radiometric surveys covering a total of approximately 3,526km2 were completed over the Ngovayang (2,566km2, 12,818 line km) and Mayo Binka (960km2, 3,177 line km) areas on 18 February 2010. Both surveys were completed at an initial flight line spacing of 400m with follow up infill lines bringing the line spacing in more prospective areas to 200m.

The Ngovayang Project aeromagnetic image of the analytical signal of total magnetic intensity shows internal banding within the metasedimentary host package, indicating the presence of magnetite within specific horizons. These magnetic units can often be correlated with itabirite mapped by le Bureau de Recherche Geologiques et Minieres (BRGM) in 1986. However, the magnetic units are much more extensive than the mapped units, indicating that the itabirite units are more widespread than previously thought, but do not always outcrop.

At Mayo Binka, the aeromagnetic image of the analytical signal of total magnetic intensity has identified magnetic features in the central eastern portion of the tenement associated with an area with known outcropping massive magnetite/hematite. Previous rockchip sampling of this outcropping massive magnetite/hematite and associated itabirite units returned iron values ranging from 55-67% Fe.

- Evaluation of priority targets in the northern Ngovayang area in close proximity to existing rail/road infrastructure.

Legend has been invited to attend a Ngarluma Aboriginal Corporation Board Meeting to discuss outstanding issues related to the proposed heritage agreement, which has delayed field activities.

A rehabilitation plan for the Mt Gibson plant/mill site was completed by Legend's environmental consultants following a site visit.

- Final rehabilitation around the plant/mill site has commenced with a view to reducing the environmental liability.

During the quarter, Legend divested its interests in one exploration licence and eight prospecting licences in the Thangoo area.

Delays in finalising the magnetic inversion modelling of high resolution aeromagnetic data over the 22km strike length of BIF at Woodley have been experienced. Results are expected shortly.

During the quarter Legend signed a Sale Agreement with Nemex Pty Ltd, a company associated with Mr Bruce Legendre, whereby Legend sold its interests in the 'Thangoo' group of tenements to Nemex for A$10,000. These tenements comprised a portion of the Gum Creek project and the board deemed that the nominal sale was preferable to dropping the tenements in question.