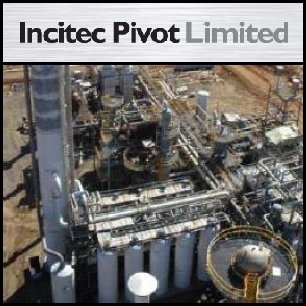 Incitec Pivot Limited (ASX:IPL) reported net profit of A$132.4 million for the first half ended March 2010, 33 per cent higher than a profit of A$99.6 million in the previous corresponding period.
Sydney, May 10, 2010 AEST (ABN Newswire) - The Australian market was stronger this morning after European Union finance ministers agreed to create emergency measures totalling more than 500 billion euro to help eurozone countries facing financing trouble. The fund involves 440 billion euro from eurozone governments and another 60 billion euro of loan funds coming from the European Commission.

ASX:IPL) reported net profit of A$132.4 million for the first half ended March 2010, 33 per cent higher than a profit of A$99.6 million in the previous corresponding period. Managing director and CEO Mr James Fazzino said this was a sound result considering external impacts including a higher Australian dollar, lower fertiliser prices and the soft US economy leading to lower volumes in North America. The company's increased fertiliser sales volumes in Australia and the ongoing Velocity efficiency program partially offset the impact. Incitec said its business is well placed to benefit from the eventual recovery in the US economy, although the timing of any recovery is uncertain. The company also said there would be continued earnings momentum in the Asia Pacific explosives business, with lower cost sourcing.

ASX:AVE) upgraded its financial year 2010 guidance based on improving cash flow coming from with its own business together with the IOR Group business. Aevum said it has successfully completed the integration of the IOR business into Aevum management platform, three months after the merger and well ahead of its schedule. Aevum revised its operating cash flow of A$27 million to A$29 million, up from previous guidance of A24.4 million. The company expects net profit after tax of A$14 million to A$16 million, compared with a loss of A$12.2 million for FY 2009.

ASX:MCC) has received a further proposal from Peabody Energy Corporation (

NYSE:BTU) under which Peabody would acquire all the shares in Macarthur with A$15 cash per share, down from a prior offer for A$16 per share. Peabody continues to be willing to provide any or all of Macarthur's three major shareholders, Citic Resources (

SEO:005490), the opportunity to retain their economic interest in Macarthur. Macarthur board advised shareholders to take no action in relation to the revised offer.