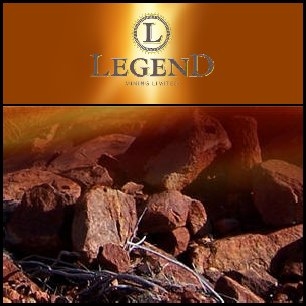 PINK:LGDMF) is pleased to announce results from a further 277 rockchip samples from the Ngovayang District at its Cameroon Project in West Africa. A total of 349 samples have now been taken with the majority from the Eseka prospect (306) and the remainder from the Logmangan prospect (36) some 17km to the WSW. The rockchip sampling is non-systematic and comprises predominantly float/grab samples due to limited outcrop. The objective of the exploration team is to develop a pipeline of targets for drill testing and the Logmangan prospect has been selected to follow Eseka.

Legend Managing Director Mr Mark Wilson said "It is pleasing to see these assays confirming the tenor of the previously released results. Two bulldozers have been mobilised to the Eseka prospect to give vehicle access to the main anomalies and to provide subsurface geology. We anticipate drill testing to commence in the September quarter using a man portable diamond rig".

The massive magnetite group is characterised by high iron values between 63-69% Fe with associated low silica, alumina, phosphorus and loss on ignition (LOI) values. The goethitic/ limonitic group has an iron range of 47-63% Fe with varying levels of silica, alumina, phosphorus and LOI. Iron values of the weathered itabirite group have a range of 29-47% Fe (average 37% Fe) with associated silica ranging from 10-51% SiO2 (average 35% SiO2), which is typical for itabirite bodies.

Figure 2 shows the location of all Eseka rockchip samples with iron results plotted over an aeromagnetic image (analytical signal of total magnetic intensity). This diagram shows three "clusters" containing high grade samples of >60% Fe predominantly associated with massive magnetite. All rockchip results >60% Fe are provided in Appendix 1 (for Figures and Appendix refer to the link at bottom of release).

The high grade results and dimensions of the three "clusters" are considered encouraging, however the relationship of the samples to bedrock is unknown at present due to the lack of outcrop and the fact that most of the samples are of float material. This will only be resolved with drill testing.

Exploration at Eseka to date has focussed on geological mapping, pitting and geochemical sampling with the aim of defining drill targets. A bulldozer is currently establishing an access track which will assist a planned drilling programme utilising a man portable diamond rig.

The Logmangan prospect is dominated by a large 2km long and up to 700m wide aeromagnetic feature associated with itabirite and massive magnetite. Geological mapping and geochemical sampling is at an early stage, however a 1.2km long itabirite zone with 40-50% Fe rockchip sample values has been identified. Access to the aeromagnetic high in the southeast which coincides with a topographic high has been established and geochemical sampling underway.

For the complete Legend Mining announcement, please refer to the following link: