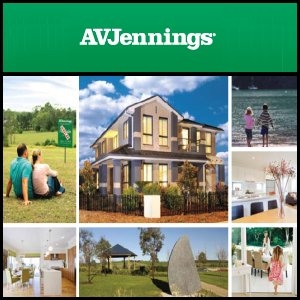 AVJennings Limited (ASX:AVJ) has entered into a conditional contract to sell its contract building division to the Japan's Sekisui House Limited (TYO:1928).
Sydney, June 11, 2010 AEST (ABN Newswire) - The encouraging Asia and US economic news overnight gave a strong lift to Wall Street. The Australian shares delivered a firm opening on Friday and the market is expecting more upbeat data from China today.

The benchmark S&P/ASX200 index and All Ordinaries both surged approximately 1.4 per cent in early trade. Major mining stocks also rose despite Prime Minister Kevin Rudd dismissed speculation that a compromise on the resources super profits tax is imminent.

Yesterday Asian bourses were inspired by a bunch of positive economic news in the region, including China's better-than-expected exports, fall in South Korea's unemployment rate and Japan's GDP growth. The Australian stocks market was more than 1 per cent higher on the encouraging Asian data and Australia's employment figures.

ASX:AVJ) has entered into a conditional contract to sell its contract building division to the Japan's Sekisui House Limited (

TYO:1928). The two companies will also form an alliance around land and the use of the AVJennings brand, ownership of which will remain with AVJennings Limited. The Australian residential development company will sell the assets of the contract building division on an "as is" basis which include the division's freehold and leasehold displays, house designs and the right to manage all existing construction contracts. AVJennings will receive payments under the deal equivalent to the net asset value of the business on the completion date.

ASX:NMS) says it expects to report normalised earnings before interest and taxes for the year ending June 30 of between A$5.5 million - A$6.5 million, as a result of a significant improvement in performance in the second half of FY2010. Neptune said this confirms its recovery in profitability during the second half and the expected return to growth from FY2011 onwards. The improvement is largely due to increased activity in the Australian offshore energy industry, contract awards and increasing tender activity in the Middle East, improved performance in the US and depreciation of the Australian dollar against the US dollar.

ASX:GMG) has established two new co-investment vehicles with CB Richard Ellis Realty Trust in the United Kingdom and Europe. The co-investment vehicles will invest in pre-committed logistics development opportunities sourced through Goodman and will be funded on an 80/20 basis, with CB Richard Ellis Realty Trust holding the majority share. The target investment in total will be nearly A$1.3 billion over an initial term of three years.