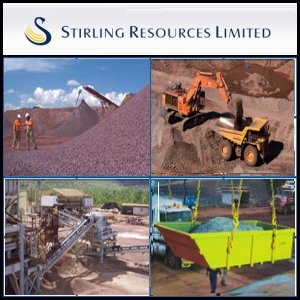 ASX:SRE) wishes to advise the following:

DCM DECOmetal GmBh ("DCM"), the 53% shareholder of Stirling, has confirmed its ongoing financial support for Stirling and its investments.

Stirling currently has major investments in three high grade development resource projects, in copper, gold and zircon. These are held through a 27% interest in Redbank Copper Limited (

ASX:MZI) and a 29% interest in Swan Gold Mining Limited (

Managing Director Michael Kiernan and non-executive director James Kiernan have decided to step down from the board effective immediately.

"I am really pleased that DCM has re-confirmed its commitment of financial support to ensure the development of, what I believe are, three outstanding projects and DCM is certainly the group to advance them. It was mutually agreed that Stirling needs new blood and I have confidence that Stirling will benefit once its projects are up and running", Michael Kiernan said.

Mr Marty Adams, has been appointed as Acting CEO, Stirling Resources. Mr Adams has 30 years experience in the mining industry. Holding a degree in Mining Engineering and an MBA, he has held operational and senior management positions in open pit and underground operations, and has extensive experience in gold, copper, iron ore, lead/zinc and mineral sands projects Dr Roman Lurf, an experienced mining executive, has been appointed as a non-executive director of the Company. Mr Lurf, an Austrian national, completed postgraduate courses at the School of Mining Engineering at University of NSW. Since 2006 Mr Lurf has worked as Project Manager and Project Leader for Rio Tinto Minerals on various projects throughout Europe. He is currently Manager - Business Improvement and Business Evaluation for Rio Tinto Minerals, responsible for Europe and Asia Pacific.

Mr David Nabarro, a non-executive Director, has been appointed as Chairman of Stirling.

"DCM is strongly supportive of Stirling and its investments in gold, copper and mineral sands - commodities with a very strong outlook. I am also excited about this new chapter in the company's development which should promptly result in our core projects reaching the stage of production and cash-flow generation," Dr. Rohtraut Skatsche-Depisch, Managing Director of DCM said. 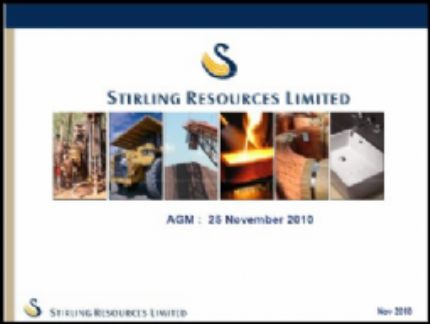 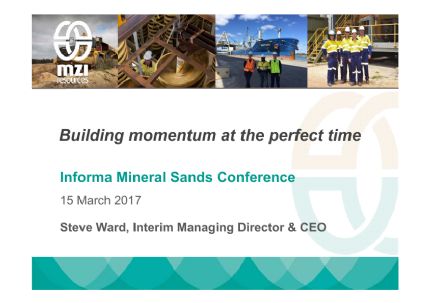