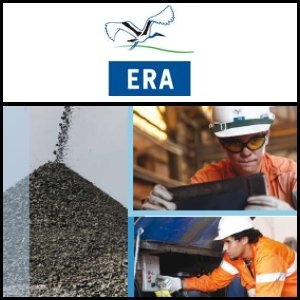 ASX:ERA) said the full year uranium oxide production dropped due largely to record rainfall. Forecast full-year production was downgraded to 4,300-4,700 metric tons of uranium ore from a previous view that it would be in line with 2009's level of 5,240 tons.

ERA produced 1,717 tonnes of uranium oxide in the six months to June, down 36 per cent on the previous corresponding period. Ranger uranium mine will be largely responsible for a full-year output reduction of as much as 18%, chief executive Rob Atkinson said.

The heavy rain meant ERA could not access to the bottom of the pit for virtually all of the first half, but ERA expects to regain access to higher grade ore located in the lower levels of the pit in July, with mill grade progressively increasing throughout the second half of the year.

The company said sales are expected to be somewhat in excess of 5,000 tonnes of uranium oxide, with commitments met by way of inventory management, flexibility of shipments to customers and a small volume of secondary purchases.