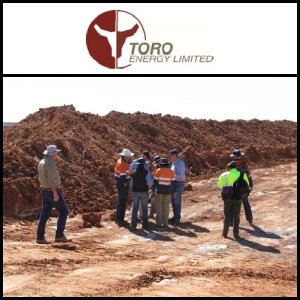 PINK:TOEYF) ("Toro") has completed the extraction of a bulk mineralised sample from a Resource Test Pit at its 100% owned Wiluna Uranium Project.

Over the past month 22,100 tonnes of material were extracted from the Test Pit within the following categories:

(Note: Grades are estimates from gamma readings taken by a Uranium Grade Survey Monitor (UGSM) mounted on a vehicle during pit grade control work. The UGSM is calibrated against known standards on site, and final grades are subject to confirmation by assays).

The Test Pit has successfully demonstrated:

- Similar distribution of mineralised material grades to that seen in drilling data;

Pit operations commenced one month ago, with initial pre-stripping of barren surface soil and material to allow commencement of selective mineralised sample extraction. A Vermeer continuous mining machine successfully cut and mined the calcrete hosted mineralised and waste material, which was then removed with ancillary loading and trucking equipment.

The Vermeer machine had no difficulty cutting the harder calcrete and cap material, nor mining the compacted sands, clays and calcretes which comprise the uranium mineralised material.

A selective grade control system was successfully demonstrated by gamma mapping of the pit floor using a vehicle mounted focussed gamma probe. This mapped the mineralised material and waste prior to cutting, which then was selectively removed after a cut of approximately 25 to 30 cm. The process was repeated each cut to ensure maximum selectivity.

Completion of the Resource Test Pit has provided Toro with invaluable information enabling the company to be well positioned to complete the Bankable Feasibility Study. In particular it has enabled Toro to:

- sample the mineralised zone and provide test material to optimise process flowsheet design from metallurgical characterisation and metallurgical testing; and

- develop an operational and environmental management strategy for mine groundwater.

While ground water inflows were higher than anticipated, partly due to less optimal performance of the installed geopolymer barrier, further groundwater management tests will now be planned, including modifications to the geopolymer barrier and other trials.

The Test Pit proceeded under a Mining proposal and a Project Management Plan approved by the Western Australian Department of Mines and Petroleum. It also received clearance by Native Title claimants. Three members of the Wiluna indigenous community are employed on the Test Pit work and two local earthmoving enterprises have been engaged for loading, trucking and ancillary pit and surrounding activities. Toro has hosted recent site visits by government regulators and Traditional Owners.

The completion of the Wiluna Project Resource Test Pit is an important milestone for Toro as it moves toward its goal of uranium production in 2013.

For the complete Toro Energy announcement including pictures, please view the following link: