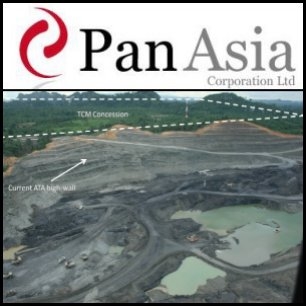 ASX:PZC) (Pan Asia or the Company), the Company provides the following information by way of update regarding Pan Asia's proposed acquisition of an interest in certain coal projects in Indonesia through the purchase of all of the issued capital of Innovation West Pty Ltd (Innovation West or IW) (Acquisition).

As previously announced, Innovation West is an Australian company which has an interest in a number of coal projects in Indonesia. Upon completion of the Acquisition of Innovation West, the Company will acquire a significant and balanced package of coal assets. Details of the asset package and key commercial points are summarised in this release.

Pan Asia's Board and management are very enthusiastic as to the quality and prospectivity of these interests and are committed to completing the Acquisition as soon as is practicable.

The projects being acquired provide:

- A flagship project that is in pre-development stage (TCM)

- A number of exploration projects & a pipeline of additional project opportunities

The Company believes this combination of assets provides the Company with the platform to achieve its initial goal of becoming a significant supplier of competitively priced energy to Asia.

The projects that Pan Asia gains access to via the Acquisition of Innovation West are detailed in Attachment A (see link at the bottom of the release) but are over-viewed below:

- JORC reserve of 5.84 Mt and Measured and Indicated resource of 19.63 Mt with additional potential.

- USD 5 M advance already provided for expansion of production, repayable to IW from production plus royalty.

- Right to offtake a portion of production via a pre-financing.

i. Offtake rights for production from NAD, PMU, BCKP & SIM and RAY.

A key part of the Company's strategy is to acquire the offtake rights of projects in which it is involved. To this end, it has formed a relationship with Rockfield Resources as an adviser in the handling of these offtakes. The first completed offtake for 4.8 million tonnes of coal from Nadvara with Noble was recently announced (refer ASX announcement 23 August 2010).

Pursuant to this arrangement, IW has entered into a coal purchase agreement with Noble, with coal deliveries to commence September 2010. Noble has provided finance of A$2 million to IW and Pan Asia has agreed to provide a corporate guarantee to Noble in connection with this financing.

A thorough legal due diligence process over the major rights being acquired (NAD and TCM) has been completed and is in the final stages of completion on the secondary assets. The the due diligence for acquiring IW has been satisfied as the Board considers the major rights (NAD and TCM) being acquired are more than sufficient to proceed with the Acquisition. The Company is well advanced now with the preparation of the Notice of General Meeting for seeking shareholder approval for the Acquisition of IW (refer section 5 of this update for indicative timing).

As previously advised, the material terms of the Acquisition are as follows:

(a) Pan Asia will acquire all of the above-mentioned interests by purchasing all of the issued capital of Innovation West.

(b) The consideration to be paid to the vendors of Innovation West (Vendors) will be 655,000,000 fully paid ordinary shares in the capital of Pan Asia (noting that 25,000,000 performance shares were initially provided for with a performance hurdle to conversion which has now been achieved upon the signing of the off-take agreement with Noble Resources. These will now be issued as fully paid ordinary shares).

(c) Pan Asia will reimburse Innovation West for all expenses incurred in relation to Innovation West's own legal, financial and technical due diligence enquiries in respect of the coal projects which it has acquired an interest in.

(e) The Vendors will be entitled to nominate 2 new members to the Board of Pan Asia.

(f) Completion of the Acquisition is subject to certain conditions (usually seen in these type of acquisitions), the key condition being the Company obtaining all necessary shareholder and other approvals for the Acquisition pursuant to the Corporations Act and the ASX Listing Rules.

ASX has confirmed that in order for Pan Asia to complete the Acquisition, it will be required to obtain shareholder approval for the change of nature and scale of Pan Asia's activities arising from the Acquisition in accordance with Listing Rule 11.1.2 and comply with Chapters 1 and 2 of the Listing Rules, as if Pan Asia was applying to admission to the official list of ASX.

Shareholders should also note that Pan Asia will need to consolidate its capital for the purposes of re-compliance with Chapters 1 and 2 of the ASX Listing Rules, namely the requirement to have its shares quoted at the required listing admission price. The final ratio for the consolidation is currently under consideration by Pan Asia and will be advised in due course. Outlined below is the capital structure of Pan Asia assuming completion of the Acquisition and a consolidation on a 20 for 1 basis (noting actual final consolidation ratio will be set at the appropriate time):
Notes:

(1). It is noted that a capital raising on terms to be determined and pursuant to a Prospectus will occur concurrently with completion of the Acquisition. At present, it is anticipated that the Company will raise a maximum of A$1 million with a minimum subscription of A$200,000. The above assumes maximum capital raising.

(2). Assumes no further issue of shares in Pan Asia prior to implementation of the Acquisition, including no prior conversion of performance shares or options currently on issue.

A proforma balance sheet of the Company assuming completion of the Acquisition is set out in Attachment B (see link at the bottom of the release).

To satisfy the ASX requirements as set out above, Pan Asia is currently finalising the preparation of a Notice of General Meeting (including an Independent Technical Report on Innovation West's coal interests in Indonesia) (Meeting Materials) for the purpose of seeking the shareholder approvals set out herein. These documents will contain further detailed disclosure regarding the Acquisition and Innovation West.

The anticipated timing for the release of these documents and other key events is set out in the indicative timetable below:
* These dates are indicative only and are subject to adjustment by the Company.

Pan Asia is pleased that this Company transforming acquisition is now nearing completion and looks forward to a dynamic growth period for the Company based on the new assets being acquired.