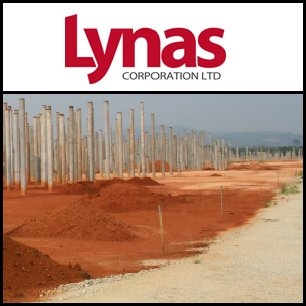 ASX:LYC) (OTCQX:LYSDY) announced a significant increase in the Mineral Resource estimate for the deposit with elevated heavy Rare Earths oxides. Previously known as the Southern Zone, this second deposit at Mount Weld has extended in terms of area and Resource and has been renamed the Duncan Deposit, in recognition of Mr Robert Duncan. Mr Duncan, the exploration geologist who first drilled Mount Weld in the 1970's, has held a passion for this resource for 40 years and recently retired from Lynas.

ASX:PRC) second export shipment of approximately 20,000 tonnes of premium hardcoking coal worth around $6 million is scheduled to depart Port of Lyttelton later today for India. Pike River's coal already stockpiled in Lyttelton, ready for loading, and will soon be on its way to one of Pikes life-of-mine customers, Gujarat NRE (

BOM:512579) who were also the recipients of its first export shipment in February this year.

ASX:SNU) has located new high-grade iron outcrops that further advance the iron ore prospects of the company's Jungle Dam project on the Eyre Peninsula of South Australia. New prospecting, detailed magnetic surveying and a revised prospectivity model have upgraded the potential for shallow haematite as Direct Shipping Ore (DSO). Southern Uranium has revised its strategy at Jungle Dam to focus on the potential for higher grade and shallow haematite as DSO. It planned to commence drilling of high priority areas at the earliest opportunity.

ASX:JAT) entered into a Heads of Agreement to acquire significant coal assets in Kalimantan, Indonesia. It is expected that an early-stage coal mining operation would commence within nine months, providing cash flow to assist with the funding of the expansion of Jatoil's oil feedstock operations in South-East Asia and exploration activities on its acquired coal portfolio. Jatoil has agreed, subject to the completion of various conditions precedent including the execution of a Share Purchase Agreement and final due diligence, to acquire 100% of Blackrock Resources Pty Ltd ("Blackrock").