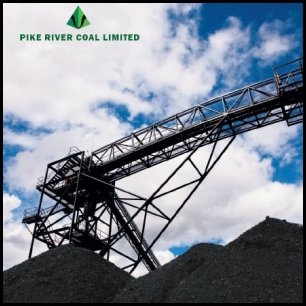 PINK:PKRRF) advises that a combination of proactive steps the company has taken to sustain the rate of underground mine development will require the company to seek a short-term working capital facility.

Pike River chairman John Dow says that discussions are at an advanced stage with potential funders and the company expects to be able to advise an outcome by the end of September.

"During the current quarter good progress has been made with the installation of hydro-mining equipment although capital costs have been higher than budgeted and installation has taken longer than expected," says Mr Dow.

"Pike River has also committed to the purchase of a second (previously unbudgeted) ABM20 continuous miner.

"The introduction of the first ABM20 in August has proved an unqualified success in driving production roadways and in achieving improved development rates and we look forward to taking delivery of the second machine ready for operation at the start of 2011. The increases in costs, and the delay in the receipt of revenues from the second coal shipment last week, have impacted short-term cash flow and led to the need for additional working capital."

Mr Dow says the mine's hydro-mining equipment is now fully installed with commissioning and first extraction planned to start this week. Pike River will review the progress of roadway development and hydro extraction over the coming weeks and incorporate the data into a review and updated forecast of annual production expectations.

"While we now have to deal with the short-term impact of the additional capex we have committed to, it has been pleasing to see the results of introducing the new continuous miner and, with hydro mining imminent, we are moving into a phase where our future production rates will be able to be forecast with more confidence."