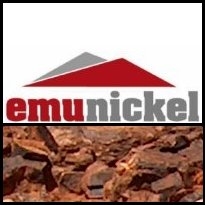 ASX:EMU) is pleased to announce that a five-hole, 968m reverse circulation drilling programme has been completed at Woolgangie, situated about 60km south west of Coolgardie and part of the Kambalda West joint venture. The drilling programme was designed to test electromagnetic (EM) anomalies that were identified by a previously reported airborne VTEM survey and confirmed by a ground EM survey. The EM anomalies are associated with a large magnetic anomaly.

Significantly, all five drill holes intersected massive to semi-massive sulphides in the target zones. The sulphides comprise pyrrhotite and pyrite with associated magnetite in a granitic host but with no economic metal grades identified at this stage. However, anomalous levels of copper and silver are present in minor chalcopyrite and tellurides.

Petrological studies show potassic metasomatism and localised hydrothermal alteration within the granitic host rocks. The anomalous levels of copper and silver are considered to be potentially significant however the nature of the mineralisation has yet to be fully determined. The massive sulphide intersections are associated with open-ended EM conductors which have not yet been fully tested. A programme of follow-up ground EM is planned, with the aim of outlining the extent of the EM conductors and identifying targets for further drilling.

For the complete Emu Nickel announcement including tables, please refer to the following link:

Emu Nickel is an active, nickel-focused, Australian-based mineral explorer with a significant portfolio of projects in Western Australia ranging from grassroots to advanced nickel sulphide projects.

Incorporated in 2007, Emu Nickel was formed to farm-in to Image Resources’ extensive portfolio of nickel projects in the Eastern Goldfields and Forrestania-Southern Cross nickel provinces and in turn allow Image to focus on its core mineral sand projects.

The Company's objective is to discover high-value nickel sulphide deposits in Australia by exploring its portfolio of projects in order to create wealth for its shareholders. Emu aims to achieve this objective by the application of sound geoscientific and commercial criteria and, where appropriate, by partnering with other companies which have the skills and financial resources to add value to Emu Nickel’s projects.