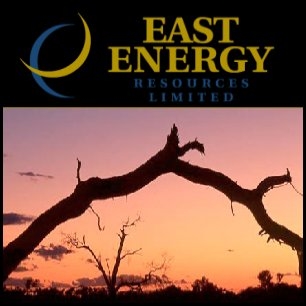 The options will be transferred from Majicyl to Osendo for nil consideration. The options have an exercise price of 20 cents and expire on 31 March 2011. The options to be transferred to Osendo represent a portion of the 63,368,002 options originally granted to Majicyl as part of the rights issue conducted by East Energy Resources in May 2009.

East Energy Resources has subsequently entered into a separate agreement with Osendo, pursuant to which Osendo has agreed to exercise the options. The exercise of the options will be subject to shareholder approval at East Energy Resource's Annual General Meeting (AGM) to be held in November 2010. If shareholders approve the transaction, Osendo will exercise 12.5 million of these options (First Tranche) providing an immediate cash injection of A$2.5 million to East Energy Resources. It is proposed that these funds will be primarily utilised to complete the work necessary to obtain a Mining Development Licence (MDL) for the Blackall tenement (EPC 1149).

The balance of the options held by Osendo after the exercise of the First Tranche can be exercised by Osendo up until the expiry date of 31 March 2011 (Second Tranche). Exercise of the remaining options is conditional on the volume weighted average price of shares for the first 10 days of March 2011 being equal to or greater than 20 cents and also that shares are not suspended from trading during this period. If the Second Tranche options are exercised by Osendo, this will provide a further cash injection of up to A$3.5 million.

Full details of the proposed transaction will be included in the AGM - Notice of Meeting document, to be distributed to shareholders in the near future.

SGX: N21) is a market leader in managing the global supply chain of agricultural, energy, metals and mining resources. The Group operates from over 150 offices and plants in 38 countries and employing approximately 70 nationalities. Noble manages a diversified portfolio of essential raw materials, integrating the sourcing, marketing, processing, financing and transportation. With 2010 first half year revenues exceeding US$24billion, Noble owns and manages an array of strategic assets, sourcing from low cost producers such as Brazil, Argentina, Australia and Indonesia and supplying to high growth demand markets including China, India and the Middle East. Today, Noble has interests in grain crushing facilities, coal and iron ore mines, fuel terminals and storage facilities, sugar and ethanol plants, vessels, ports and other infrastructure to ensure high quality products are delivered in the most efficient and timely manner to its customers.

In 2010, Noble ranked #242 on the annual Fortune Global 500. In late 2009, Noble Group was honored at the DHL SCMP Hong Kong Business Awards by winning the coveted International Award. During the year, Noble achieved "Investment Grade" ratings (Baa3) from Moody's Investors Service and (BBB-) from Standard & Poor's, complementing its initial "Investment Grade" rating (BBB-) from Fitch the previous year. In addition, Noble appears on the Forbes Global 2000 and Forbes Fab 50 lists of leading companies. Noble Group is among the 30 securities listed on the Straits Times Index.

East Energy Resources Limited (ASX:EER) is an Australia-based company engaged in mineral exploration. The Primary goal of the company is to generate shareholder value through coal exploration success and future development opportunities. 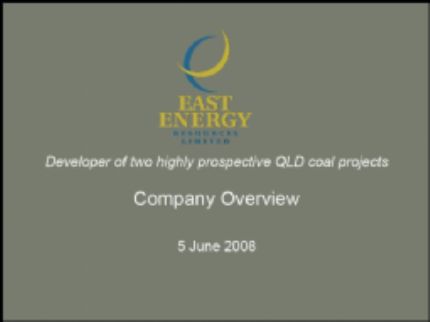