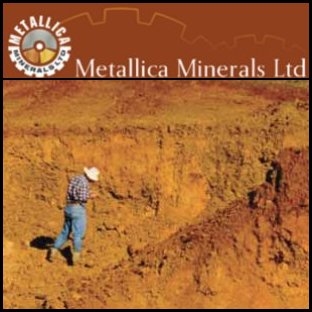 ASX:MLM) (MLM) is pleased to announce that the Company is planning to move to fulltime technical and metallurgical development of its 100%-owned NORNICO cobalt, nickel and scandium project northwest of Townsville in North Queensland.

The project milestone follows the completion by Metallica in recent weeks of the final stages of ALL exploration drilling (and subsequent receipt of all assays outstanding) from across the entire NORNICO project, as necessary to establish a sufficient resource base on which to now progress mining studies aimed at supporting Feasability Studies for developement.

No further exploration drilling on the projects core deposits is required.

Significantly, assays from the final round of drilling, on the Greenvale nickel-cobalt laterite deposit at the southern end of the NORNICO project area, have boosted resource estimates, further enhancing the prospect of a new tri-metal processing plant being established in north Queensland. (Results from an initial scoping study (refer ASX Release, September 20th, 2010) found that a proposed A$132 million Stage 1 (approximately 180,000t pa) mining and processing operation based around the Greenvale-Lucknow deposits would be "economically and technically robust".)

The enhanced resource estimate for Greenvale and Lucknow (details follow) is expected to be sufficient to support a 10 year, 180,000 to 220,000tpa processing operation (NORNICO Stage 1) on the old Greenvale Nickel Mine site and which will treat high grade Ni-Co & Sc ore.

This would maximise margins by recovering the three metals together. As the scandium oxide market grows, scandium rich ore could be incorporated into the Ni-Co-Sc ore feed to increase scandium oxide (99.9% purity) production.

The proposed resource input would be sourced from Greenvale, Lucknow and possibly supplemented in later years with high grade ore within the Kokomo deposit located north of Greenvale and within the southern NORNICO project area (see Kokomo Resource Update ASX Release 27th January 2010).

Further metallurgical testwork and beneficiation work is ongoing with results expected in February 2011.

A list of activities planned for the next few months to progress the NORNICO Stage 1 project is as follows:-

- Resource mining studies including initial pit designs and mine schedules

- Mining lease applications over the Greenvale and Lucknow resources

- Progressing the enhanced scoping study for completion in March.

In addition to this, bulk density data from three diamond holes (GVMDDH-001 to 003) was also incorporated into the resource along with a detailed topographic model for Greenvale obtained from drill collar surveys and satellite imagery completed in December.

No additional drilling has been completed at Lucknow since the maiden resource estimate in August 2010. However, three diamond holes, LKRC-001 to LKRC-003 were drilled to provide bulk density data for Lucknow and a detailed topographic survey of the area was obtained using processed data from satellite imagery flown in December. Incorporating this data into the initial resource model has led to the reclassification and revision of the Lucknow resource.

The scandium resource within the Lucknow laterite deposit is subject to a Joint Venture (JV) agreement with Straits Resources Exploration Limited (Metallica 80%, Straits 20%). Under the terms of the JV, all scandium ore is to be mined or stockpiled separately from the Nickel - Cobalt ores and kept for later processing by the JV. Laterite resources are classified as either Ni - Co ore or Sc ore under a formula agreed by the JV. As a result of this, the combined Lucknow resource is sub-divided into two separate parts - a Ni-Co resource and a Scandium resource and each are quoted exclusively. Table 5 (see link at the bottom of the release) shows the Lucknow Ni-Co resources which is affected by the Straits JV - i.e. excludes the scandium ore (high scandium and low grade nickel - cobalt), and Tables 6 and 7 (see link at the bottom of the release) detail the scandium resource at a 70 g/t Sc COG and a 120 g/t COG excluding the nickel - cobalt resource.

The Lucknow Measured, Indicated and Inferred scandium resource now stands at 6.24Mt @ 169 g/t Sc with a higher grade zone comprising 4.12Mt @ 206 g/t Sc using a 120g/t Sc COG, containing over 1.2 million Kg of scandium oxide. Within the Lucknow scandium resource, there is a lower iron portion of 1Mt at 206 g/t Sc at 18% Fe.

The resource estimate was undertaken on Greenvale and Lucknow by Golder Associates of Brisbane, using block modelling Ordinary Kriging (OK) techniques. The estimate was completed using unfolding techniques to make a wire framed model to represent the paleolaterite surfaces between drill holes, and was further refined by incorporating data from sectional interpretations of the considered logged geology and scandium, nickel, cobalt, iron, magnesium and manganese assays. A nominal 0.80% Ni-only mineralised envelope was used to constrain the mineralisation and grade estimates at Greenvale, and a nominal 0.5 %NiEq was used at Lucknow. The wireframe was then filled with 10m by 10m by 1m blocks, with the grades of the various elements estimated by ordinary kriging using a three pass search strategy and a maximum of 3 composites selected from any one drill hole. Mineralisation was extrapolated at nominal 20m from drill hole intercepts, depending on supporting information. Further details of how the Greenvale and Lucknow Resources were estimated are set out at the back of this report.

In response to shareholder and external queries, Metallica Minerals Limited advises that this month's tragic and overwhelming Brisbane and regional floods in Queensland have had no direct impact on our staff and employees, on the company, our office, project facilities or wet season (minimized) exploration activities. However some of our groups exploration tenements landowners will have been affected.

Our deepest sympathies are, however, extended to the many thousands of people affected. While we recognise the challenges ahead for them, Metallica joins the many expressions of public support that those affected can rebuild as quickly and as safely as possible.

For the complete Metallica Minerals Limited announcement including tables and figures, please refer to the following link:

Metallica Minerals Limited (Metallica) (ASX:MLM) was incorporated in 1997 by Founding and Managing Director Andrew Gillies. Metallica was established with the primary objective of creating opportunity and wealth for its shareholders through the evaluation and development of mineral projects in Queensland. Metallica was listed on the Australian Stock Exchange November 2004 (ASX:MLM). Metallica's focus and flagship project is its North Queensland Nickel Cobalt (NORNICO) 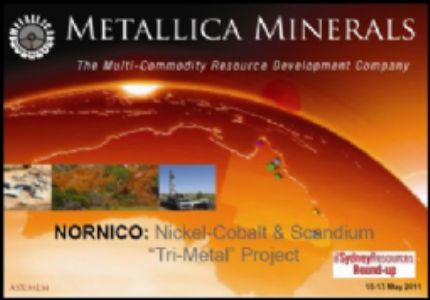