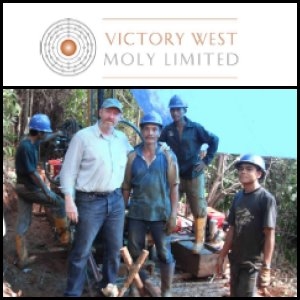 ASX:VWM) (ETR:R1E) is pleased to announce that subject to due diligence is to acquire via way of equity earn-in a 75% equity interest in a highly prospective copper/gold project located in Toraja province, South Sulawesi (the "Project").

After undertaking preliminary technical due diligence, VWM has entered into a Termsheet with the vendors of PT Noviendindo Multi Resources ("NMR") and secured the right to acquire a 75% equity interest in NMR which holds the Project.

The Project is located in a known porphyry province and the geological setting is favorable for the exploration of both porphyry Cu-Au style mineralization and more discrete zones of higher grade gold mineralization.

Previous exploration at the project area include numerous Dutch exploration Adits, which were excavated early in the 1900's exploiting copper, gold and lead from high grade quartz viens.

Lead from narrow high-grade galena veins was mined and smelted on site during the 1930's and 1940's.

More recent Exploration drilling in 1999 and 2000 intersected gold and copper mineralization, with the most significant being a 34.20m gold intersection commencing at 141.80m down hole averaging 3.05 g/t Au over the intercept, with higher grade zones included within the intercept, including 4m @ 14.7g/t Au and 4.0m @ 9.1 g/t Au.

This exploration also intersected 4.00m @ 0.48% Cu and 22.00m @ 0.18% Cu commencing at 120m down hole depth. These mineralized intercepts occur in zones of potassic altered diatreme breccias. Low grade intersections of copper were also noted in other areas where drilling was completed.

The concession area contains two porphyry targets and a potential gold target located in the margin of the diatreme breccias, evidenced by the 30 metre intercept at 3.05 g/t Au in one of the old drill holes.

Potential gold targets are also thought to occur in other areas of the concession, with a large number of old Dutch adits driven into a number of discrete areas around the prime target area.

Previous exploration has included stream sediment geochemistry, rock chip sampling and trenching, a number of geophysical surveys and a series of drilling programmes by a number of explorers.

VWM and NMR are to execute a formal Memorandum of Agreement (MOA) as soon as practically possible. An exclusivity fee of US$100,000 providing a 90 day exclusivity is payable within 5 days of execution of the MOA.

Upon successful completion of the due diligence, Victory West is to;

- Reimburse the vendors of approximately $300,000 in past costs; and

- Spend a minimum of SU$5million over 3 years to earn an 75% equity interest in NMR (the spend is inclusive of exploration, operational and administration costs)

- The Vendors are to retain a 25% 'free carried' equity interest in NMR until the completion of a feasibility study.

- The parties are to agree to issue the Vendors a nominal number of VWM shares against specific milestones (i.e. JORC resource, production etc) the quantum and number are to be agreed and to be incorporated into the MOA.

Victory West has also retained founding shareholder of NMR Mr. Marthen Teko to act as an advisor/consultant to the group.

Mr. Teko is a Mining Industry Veteran having worked 17 years with PT Inco at Sorowako Nickel Project in South Sulawesi in Exploration, then mining then processing. 12 years as Project Manager in Indonesian mining operations with Theiss, Clough and KPC amongst others. For the past 6 years he has Consulted to Indonesian and International Mining and Investment companies regarding mining and mining prospects for Metals and Coal.

Victory West CEO Robert Hyndes said the NMR Project represented a fantastic addition to the Company's metals portfolio that provides significant upside. It also came with the significant benefit of the services of Mr. Teko, the local partner in the project. Mr Hyndes said Mr Teko would be invaluable not only for this project, but also to support the Company in its other endevours.