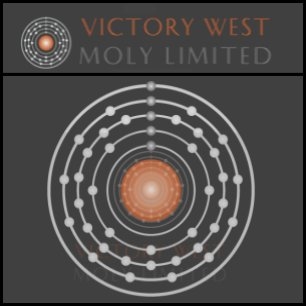 ASX:VWM) has been reviewing projects in Indonesia for the last few years and has developed strong relationships with a network of local parties that are seeking a strong listed partner, with mining expertise, access to development capital and the Chinese market.

In line with the Company's vision of finding, proving and extracting value from world-class metals projects, this network now provides Victory West with a pipeline of metals projects which has more recently focused on complementary DSO nickel projects. These opportunities while in various stages of resource delineation and development represent a pipeline that will enable VWM to secure strong Chinese financial and expertise backing.

As part of this strategy, the Company has developed a due diligence methodology that is consistent with the requirements of these funding and investment group. Victory West is currently undertaking preliminary due diligence investigations on two additional nickel projects located within South Sulawesi which have shown early promise.

Victory West Moly advises that it is currently in negotiations with the Indonesian vendors of the USSU nickel project in Sulawesi, Indonesia to vary the agreements under which Victory West was to acquire a majority stake in USSU.

Under the terms of the existing agreements, Victory West was to acquire 70 per cent of USSU (through the acquisition of Oceantide Investments Pty Ltd) in return for sole funding the project through to commercial production and making vendor payments totalling US$3.75 million in tranches based on agreed milestones. Additionally, as previously announced, the Company has been undertaking an ongoing technical review of the project through an extensive drilling and exploration program.

This review has indicated the existence of high grade saprolite nickel ore and broader limonite and saprolite mineralisation. However, it has become clear to Victory West that in order to raise the significant equity funding required for the project, the Company would have to expand on its exploration activities to build a substantial certified resource before committing further investment.

As a result of this reassessment, Victory West has adopted what it considers to be a prudent course of action in the best interests of all parties by seeking to renegotiate the terms of the current agreement.

It is expected the parties will seek to secure alternative funding from project financiers to develop USSU. The Vendors of PT PUL, will continue to spend their own capital to develop the project and has begun pre-strip and development activities on an area of identified high-grade mineralization. Victory West will continue to assist PT PUL through the provision of technical support at the direction of PT PUL.

As a result, the Company will withdraw resolutions 1, 2, 5 & 6 from the resolutions sought to be approved at the General Meeting of Shareholders to be held tomorrow the 14th of April 2011.

Victory West will update the market on progress in finalising the negotiations with alternative financing for USSU at the first opportunity.