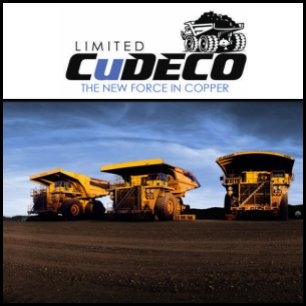 ASX:CDU) said today that FIRB has approved Oceanwide International Resources Investment Co. Limited to increase its shareholding in CuDeco to 19.9% through a further 15 million share subscription at A$3.80 per share. The raised funds will be utilised for CuDeco's flagship Rocklands Group Copper Project in Cloncurry in northwest Queensland. The Project is expected to commence commissioning in late 2012 or early 2013.

ASX:AZT) announced the completion of its definitive feasibility study for the Maules Creek coal project, confirming the highly attractive economics of its large scale metallurgical open cut mine with a project life in excess of 30 years. Aston now expects to produce 84% semi-soft metallurgical coal over the first 20 years of production.

ASX:GBZ) has identified previously undiscovered Rare Earth Element and Yttrium mineralisation at the Milo Prospect, part of the Brightlands Copper-Gold Project in northwest Queensland. The Company will conduct further testwork to determine the extent and grade of the rare earths discovery.

ASX:AGR) has signed an Option Agreement to acquire 100% of two potentially large-scale phosphate projects in southeast Brazil. Surface rock chip sampling has returned high grade phosphate mineralisation up to 31.70% P2O5. The phosphate projects further compliment the Company's Brazilian phosphate and potash projects, enabling Aguia to capitalise on the increasing demand for fertilisers as it aims to be a developer in the Brazilian fertiliser sector.