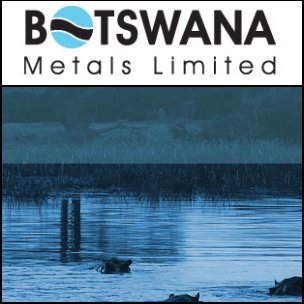 ASX:BML) has now received the latest drill results for the 6000m drill program completed at the Dibete prospect in Botswana (PL111/94).

Significant Copper - Silver mineralisation has been intersected along 2 NW-SE trending structures, with mineralisation still open along both structures. The mineralisation associated with the line 6100E structure remains open to the North, East and West with a current strike length of 250m.

The primary and supergene sulphide mineralised zone consists of chalcocite, pyrite, and bornite vein swarms which are silver rich. The primary mineralisation may extend at depth associated with a VTEM anomaly off to the south. This needs to be confirmed by additional drilling. Several other VTEM anomalies have now been interpreted from the recently completed Helicopter VTEM flight program, which are yet to be fully tested.

Some of the most significant intercept results from the recent drilling include: (see full announcement in link below):-

A total of 93 Reverse Circulation (RC) drill holes for 6000 metres were completed at Dibete prospect during March to June 2011. This program (DBRC023-116) was designed to assess the orientation and geometry of the mineralisation intersected in 2010 and also includes several holes at Dibete East. Details of this drilling are shown in Figures 1- 3.

All RC holes were sampled at 1 metre intervals, and analysed for Cu, Pb, Zn, Ni and Ag by ALS Chemex, Johannesburg South Africa. Significant results above a cut off grade of >3000 ppm Cu (0.3%) are shown in Table 1 together with the type of mineralisation intersected (e.g. supergene oxide, supergene sulphide or primary). Drill results for the 2010 program (Holes 1- 22) are also included in Table 1 for reference.

Four types of mineralisation are evident from this recent drilling program and are related to the degree of oxidation:-

Supergene oxide copper is exposed at surface in outcrops, trenches and old workings, and typically up to 35 metres downhole. Mineralogy consists of malachite, azurite, and chrysocolla. This zone forms a blanket spreading out from the underlying primary mineralisation. RC drill results typically show Cu enrichment concentrated between 18 to 35 metres in this zone.

A supergene sulphide transition zone is typically found from about 35 to 38 metres downhole consisting of chalcocite and pyrite with minor malachite. Laboratory results show Cu values gradually increase through the transitional zone approaching the primary mineralisation.

From approximately 38 to 41 metres downhole is a mixed primary and supergene sulphide zone consisting of chalcocite, pyrite, and bornite vein swarms with traces of malachite seen on fractures. Assay results indicate the primary bornite vein swarms, as well as the supergene mineralisation, have associated silver. Below 41 metres there is a sulphide zone with pyrite and minor disseminated chalcopyrite. Sulphides are fresh with minor oxides along fractures.

Structural Control on the Mineralisation

Preliminary interpretation of the RC assay and geological data was used to construct a wireframe model of the mineralised zones, as shown in Figures 4 -6.

The wireframe model shows the orientation of copper mineralisation using a 1000 ppm (0.1%) Cu cut off. Assays indicate the copper mineralisation, and in particular the bornite veins, have a high silver content. In Figure 5 the oxide and transitional zones are shown as green from 0 to 38 metres downhole. The mixed supergene and primary sulphides zone are shown in purple generally from 38 to 41 metres downhole.

From the model the mineralisation is seen to pinch and swell, and to be uplifted or downthrown laterally between holes, This is due to local faulting and folding which is evident at the surface in outcrops and trenches.

Progress to date on the Dibete Prospect is leading towards defining a body of mineralisation that will have a resource estimation study carried out on it following the next phase of drilling. The close proximity of the Airstrip and Dibete projects, which have similar primary and supergene mineralisation, is considered to be very encouraging.

Boab Metals Limited (ASX:BML) is a Western Australian based exploration and development company with interests in Australia and South America. In Australia, the Company is currently focused on developing the Sorby Hills Lead-Silver-Zinc Joint Venture Project in WA. Boab owns a 75% interest in the Joint Venture with the remaining 25% (contributing) interest held by Henan Yuguang Gold & Lead Co. Ltd. 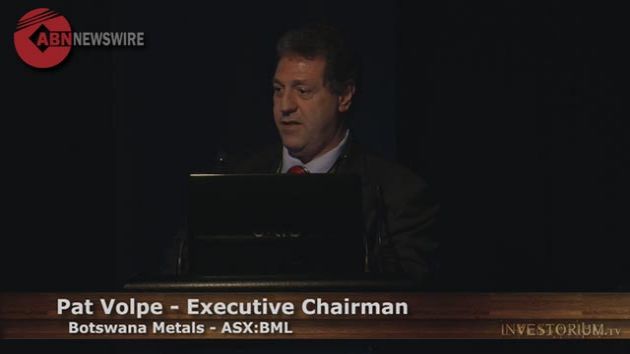