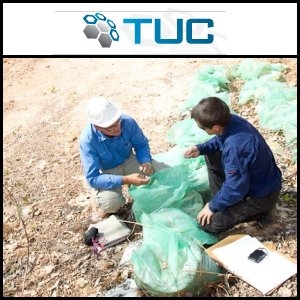 ASX:TUC) is very pleased to announce that further analysis of significant drill results at TUC's Stromberg Prospect (formerly the Energy Project) has confirmed the presence of significant near surface heavy rare earth mineralisation.

- The Stromberg Prospect is situated at, or very near surface, in a flat lying tabular body. Further shallow exploration potential exists over a highly promising and undrilled +2km prospect length.

- Further exploration by the way of shallow RC drilling is now planned at both the Stromberg and Drax Prospects in the coming months. Road building, currently in progress, will allow rig access to both these areas by September 2011.

- Heavy rare earths, such as dysprosium (Stromberg Prospect) and neodymium (TUC's Quantum Prospect), which are used in such applications as hybrid cars and clean energy technology, have seen a ~300% price increase since February 2011.

- The chemistry of the samples supports the theory that the mineralisation is hosted by the rare earth mineral xenotime. Xenotime mineralisation would support a low cost physical separation process, such as magnetic concentration or froth flotation (mineralogical and metallurgical test work has been scheduled to confirm this interpretation).

- In addition, geological interpretation and results of rare earth analysis on soil samples at TUC's other major prospect in the Daly Project, the 'Drax Prospect' (see results in TUC's June 2011 quarterly activity report) have highlighted the much larger exploration potential that exists for HREE's in the region.

- This discovery gives TUC Resources a unique value position in that it now has two complimentary REE projects, with the potential for low cost processing and large exploration upside, very closely located next to each other in the Northern Territory:

Figure 1 (see link at the bottom of the release) shows the Stromberg Prospect (Daly Project) in relation to TUC's other active prospects in the highly prospective Pine Creek basin. Stromberg is approximately three and half hours drive south of Darwin.

Importantly, RC drilling at Stromberg has already defined two coherent sections of mineralisation. Figures 3 and 4 (see link at the bottom of the release) show all relevant intersections returned to date on geological cross-sections. The shallow, flat lying nature of the mineralisation means that it is an easy prospect to drill towards a resource.

The Stromberg Prospect should have a low stripping ratio and with the soft weathered rocks noted, it could provide potential for a low cost mining operation (provided that further exploration and metallurgical test work is successful).

Figure 5 (see link at the bottom of the release) shows a 3D aerial view of the Stromberg Prospect showing a highly promising 2.3km prospect strike length, as determined by a radiometric overlay. Figure 5 also shows the location of the two sections drilled to date.

HREE's Assays confirm high proportions of valuable heavy and medium REE's with dysprosium at 7.2% of total rare earth distribution, yttrium (68.2% of distribution), erbium (5.2%), ytterbium (4.8%), gadolinium (3.3%) terbium (0.86%), europium (0.36%) and Holmium (1.8%). Figure 6 (see link at the bottom of the release) shows both the distribution and relative value of the rare earths within the Stromberg HREE prospect.

Heavy rare earths such as dysprosium oxide which are used in such applications as permanent high powered magnets for hybrid cars (growing markets), have seen a ~300% price increase since February 2011.

Dysprosium is forecast to remain in supply deficit for years to come and prices are expected to remain high.

The current HREE prices of particular relevance to TUC's Stromberg Prospect, based on the reported drill results in this announcement are:

Chemical analysis of the samples supports the theory that the mineralisation is hosted by the rare earth mineral xenotime (yttrium phosphate). A clear positive correlation exists in the assay data between yttrium and phosphate grades. Xenotime mineralisation could support a low cost physical separation process such as magnetic concentration (mineralogical and metallurgical test work has been scheduled to confirm this interpretation and also to consider the effect/value of the associated uranium mineralisation in any mineral processing options).

Further exploration by the way of shallow RC drilling is planned and is being expedited at both the Stromberg and Drax prospects in the coming months. Road building is in process (Figure 7 (see link at the bottom of the release)) to allow rig access to both these areas, with drilling scheduled to commence in September 2011.
Why the Stromberg HREE Prospect is important for TUC Resources Ltd This discovery gives TUC a unique value position in that it now has two complimentary REE projects, with the potential for low cost processing and large exploration upside, relatively near to each other in the Northern Territory.

***Ian Bamborough, Managing Director of TUC Resources, believes that a number of economic and market factors combine to make this discovery very important for TUC:

- China is widely known to control 97% of the rare earth market;

- The above, combined with a growing energy efficient market in which these products are mainly used, has led to higher prices as the rest of the world clambers for product, and, more importantly, security of supply;

- A number of projects are due to come on line outside of China to supply this demand but most projects are focussed towards the light rare earth end of the market and heavy rare earth production will likely remain in deficit until at least the years 2015-2017;

- Importantly, China is not likely to give up it's dominance of the rare earth market and potential exists for it to apply its quotas in certain valuable parts of the rare earth spectrum; such as the heavy rare earth component, thus effectively increasing the security risk of supply.

- Very few heavy rare earth rich deposits such as TUC's Stromberg exist outside China, and with continued exploration and metallurgical success, TUC Resources could be in an ideal position to meet some of this security of supply need, particularly given the obvious potential for a low cost mining operation.

The Directors and Team at TUC are very pleased with this development in the Daly Project and look forward to providing more news in the coming months.