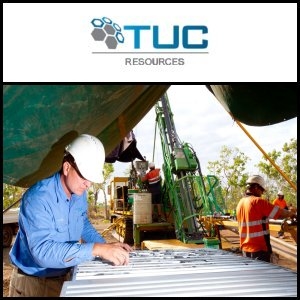 ASX:TUC) is pleased to announce that recent RC drilling has intersected a number of new exciting results.

Drilling shows coherent zones of mineralisation over a strike length of over two kilometres.

A highly favourable distribution of Heavy Rare Earth Elements (HREE) including Dysprosium (Dy) at 7.5% of Total Rare Earth Oxide (TREO) and Yttrium at 64.9% of TREO exists.

In addition, district soil sampling has confirmed HREE exploration potential at the nearby Scaramanga Prospect, 5km northeast of Stromberg.

- Zones of coherent mineralisation have been intersected over a +2km strike length.

- Mineralisation is situated at or near surface in an easily accessible flat tabular body.

- Mineralisation remains open both in cross section and along strike.

- 85.8% of the rare earth distribution is the valuable and high demand Heavy Rare Earth Elements (HREEs).

- Stromberg mineralisation has low levels of the deleterious element Thorium (3.5ppm Th for an average TREO of 0.45% from all significant intersections >0.2% TREO).

- Soil sampling at the Scaramanga Prospect (5km NE of Stromberg) has confirmed that significant exploration upside exists within a short distance of the Stromberg prospect as well as highlighting the broader district potential.

- Thickening of mineralisation and an increase in grade has been noted in areas of interpreted faulting. Planned drilling will target these areas with respect to finding a source of mineralisation.

Other Important Facts about Stromberg;

- Continued demand for critical HREEs in a variety of technologies, against a limited global supply, make any potential resource at Stromberg very attractive. This is due to the potentially quicker development time offered by Stromberg's shallow nature and possible simple process flow sheet.

Geologically, mineralisation is hosted in flat tabular alteration zones. Interestingly, thickening of mineralisation has been noted in areas of interpreted faulting. This thickening around fault zones represents an excellent target for planned exploration to look for a possible source or 'feeder' zones for mineralisation.

Multiple zones of HREE mineralisation remain open on section and planned drilling will target the addition of material in these areas as well as looking for 'stacked' zones between existing sections.

Assays returned from RC drilling at Stromberg confirm high proportions of HREEs with an average of 85.8% above a cut-off of 0.2% TREO. Of this HREE content the critical and valuable Dysprosium and Yttrium average 7.5% and 64.9% of total rare earth oxide distribution respectively.

The current REE prices of particular relevance (sourced early November from www.metal-pages.com and www.asianmetal.com) to TUC's Stromberg Prospect based on the reported drill intersects in this announcement are;

Such a rare earth mix is very attractive as new efficient technologies drive demand for these metals against a limited global supply effectively keeping prices higher.

Following completion of drilling and return of assay results four bulk composite samples at a range of grades have been prepared for metallurgical test work to help determine;

If metallurgical work and further exploration are successful significant advantages in terms of time savings for project development could be possible.

A highly positive note is given by a low quantities of deleterious elements including 3.5ppm Thorium and 195ppm Uranium for an average TREO of 0.45% from all significant intersections >0.2% TREO.

The potential at the near-district level is confirmed by XRF soil sampling on the nearby Scaramanga Prospect. The results of this work, comparative to Stromberg Prospect, indicate that significant exploration upside may exist around and within a short distance of the Stromberg area.

XRF, and soil and rock chip sampling is planned both at Scaramanga and other anomalous areas with the aim of delimiting further HREE mineralisation.

Further exploration is planned at the Stromberg Prospect, this will include;

TUC continues to be excited by the results of work at Stromberg.

The shallow, tabular nature of mineralisation (easier and quicker to drill), a promising Xenotime host (simple processing flow sheet), and a valuable rare earth mix (critical HREE dysprosium and yttrium) provide advantages and incentives for a quicker development than most other rare earth prospects.

The potential for further mineralisation in the immediate area of Stromberg (Scaramanga Prospect) adds to these possible advantages and incentives.

For the complete TUC announcement including figures and tables, please view the following link:
http://media.abnnewswire.net/media/en/docs/ASX-TUC-566836.pdf