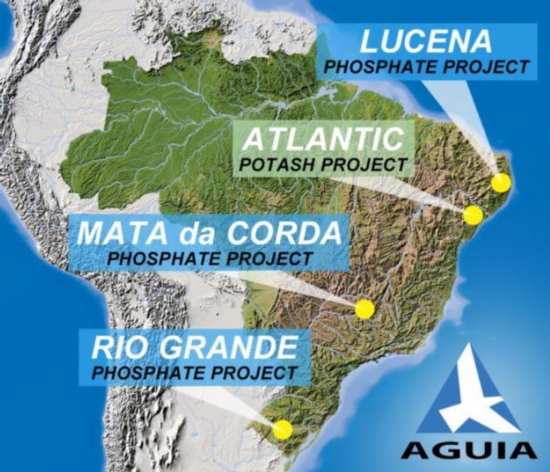 ASX:AGR) ("Aguia" or "Company") is pleased to announce an operational update for its projects in Brazil.

- Tres Estradas Project beneficiation test work has commenced and independent consultants(1) are engaged to confirm a Mineral Resource estimate that can be reported in accordance with the JORC Code and NI 43-101 standards. This remains on track to be achieved in the June quarter

Over the last two quarters, the Company has completed drilling programs at both its Tres Estradas ("TE") Phosphate and Atlantic Potash Projects. Results of these programs are summarised below.

Results of the first drilling program at TE returned a significant new early stage phosphate discovery in the state of Rio Grande do Sul in southern Brazil.

Early interpretation indicates that the project has similarities to the carbonatite style hosted phosphate deposits mined by Vale within Brazil, examples include the Araxá (Reserve: 88.7 Mt @ 11.12% P2O5) and Cajati (Reserve: 85.1 Mt @ 5.45% P2O5) operations.

The Company will accelerate efforts on its phosphate projects and in particular in the Rio Grande do Sul area at TE and the surrounding projects including Joca Tavares that is yet to be drill tested.

The area hosts excellent infrastructure and primary fertiliser markets. The three southern States of Rio Grande do Sul, Santa Catarina and Paraná currently consume around 1.0 million tonnes P2O5(2) or around 30% of Brazilian consumption, with no currently active phosphate mines in the States.

The projects will be logistically advantaged to supply into this region compared with either phosphate mined in Minas Gerais, Goias or imports.

On confirmation of positive beneficiation results and a resource, the Company will begin scoping on an operation to produce a concentrated rock phosphate product.

The Company has completed a drilling program of two holes at the Atlantic Potash Project of which the second hole (PAC-002) intersected a significant thickness of the targeted Ibura Member that is the host for potash mineralisation within the basin.

The second hole intersected the top of the Ibura member at 1,360 metres and coring was completed at a depth of 1,578.8 metres. Drilling intersected wide zones of evaporite indicators including nodules and massive zones of anhydrite. The drilling results indicate a good correlation of marker horizons evident from other historical Petrobras holes within the region.

Based on results of the first two holes, the Company has decided to suspend the drilling program and complete a detailed review and interpretation of all available data for the project. In particular, the re-interpretation of historical 2D seismic data needs to be completed to better understand the geological controls on the mineralisation.

The Company had another two holes planned as part of the current program but has commenced negotiations in relation to the early termination of the drilling contract so that it can complete a comprehensive review of targets and targeting criteria in the basin.

The Company continues to see the Atlantic Potash Project as a highly prospective area located adjacent to the only potash producing mine in Brazil, Vale's Taquari-Vassouras underground sylvinite mine and further work is required to fully understand the basin.

The Company will concentrate its efforts on the Rio Grande area in particular at TE where work is continuing as planned. The Company has engaged the services of Independent Experts to commence:

1. The calculation of an initial Mineral Resource estimate from TE that can be reported in accordance with the JORC Code with results expected in the June quarter; and

The Company expects to update the market over the coming weeks with a more detailed presentation on its phosphate strategy including a clear path to accelerate the development of its project assets.

To view the complete Aguia Resources announcement including Figures 1 & 2, please refer to the following link below:
http://media.abnnewswire.net/media/en/docs/72294-ASX-AGR-20120416.pdf

Aguia Resources Limited (ASX:AGR) is focused on the exploration and development of phosphate and potash projects in Brazil. Brazil is Latin America’s biggest economy and is heavily reliant on imports of up to 50 per cent of its phosphate and 90 per cent of its potash needs. Aguia is well positioned to capitalise on the growing demand for phosphorus and potash based fertilisers in the expanding agriculture sector in Brazil and controls three large projects, located close to existing infrastructure. The Company is committed to its existing projects whilst continuing to pursue other opportunities within the fertiliser sector.