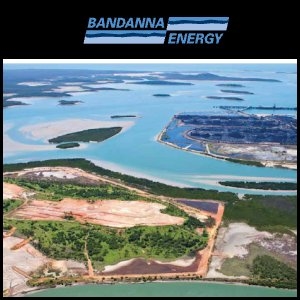 ASX:BND) today issued its annual report and full year financial statements for the 2012 financial year. Managing Director Michael Gray welcomed the issue of the annual report, which highlights the substantial progress the Company has made over the past 15 months as it progresses towards becoming Australia's next coal producer.

Mr Gray noted that "while current coal markets are soft, of interest to Bandanna is the coal price in January 2015, not in September 2012. Wood Mackenzie, one of the world's leading commodity analysts, predicts significant demand growth for the period from 2015 to 2030, leading to increased thermal coal prices in the long term."

Bandanna shares this view of long-term demand and, as outlined in the annual report, remains fully committed to progressing development of the Springsure Creek Project for first coal production in the second half of 2014. First production will coincide with the completion of Stage 1 of the Wiggins Island Coal Export Terminal (WICET).

The annual report highlights milestones achieved during and subsequent to the 2012 financial year to progress the Springsure Creek Project towards production. Key highlights include:

- commencement of construction of WICET Stage 1 in December 2011, with development works on track for completion in the second half of 2014

- substantial progress on completion of the Draft Environmental Impact Study, with regulatory approvals on track for sign-off by June 2013

- ongoing discussion with potential customers in relation to coal offtake

- ongoing discussion with potential project partners, with detailed negotiation regarding equity investment in the project to commence following the independent review of the DFS.

Reflecting on the Company's achievements and challenges during the 2012 financial year, Mr Gray observed that "the Springsure Creek Project is the only large scale, greenfield thermal coal project in Australia that has contracted port and rail capacity through facilities under construction. Despite challenging conditions in current coal markets, Bandanna is well placed, with a strong cash position and ongoing discussions with potential project partners, to enable the project to be developed and commence production in a period when forecasters predict significant further demand for thermal coal. Whilst existing coal producers are scaling back current operations, Bandanna remains focused on progressing development of the Springsure Creek Project to take advantage of anticipated improved market conditions from 2015 and beyond."

View the Bandanna Energy Annual Report at the link below:
http://media.abnnewswire.net/media/en/docs/ASX-BND-695759.pdf